Director's Cut: The Card Game is now available to buy!

Director's Cut: The Card Game is now available on DriveThruCards. If you are based in the US, you can grab a copy with shipping for $14.98.

Director's Cut: The Card Game is a two-player set collection game set in 1930's Hollywood and features authentic promotional material from that period. The game is fast paced and family friendly.

If you want to play with three or four players, I suggest grabbing and second deck and combining them together, making sure to remove the five additional "starter" cards.

I'm utterly excited about this release. I've been developing this game for around a year now and it's gone through tons of playtest and development phases. You can explain the rules in two minutes, but can find tons of fun strategy in there.

You can find an instructional video and a rules PDF on the DriveThruCards page.

Just Desserts is the latest release from Looney Labs - released just in time for International Tabletop Day 2015. This is the same team that brought us Fluxx and a personal favourite of mine, Chrononauts. Like many other of their games, Just Desserts is a pocket sized card game all about silly fun. Let's take a look! 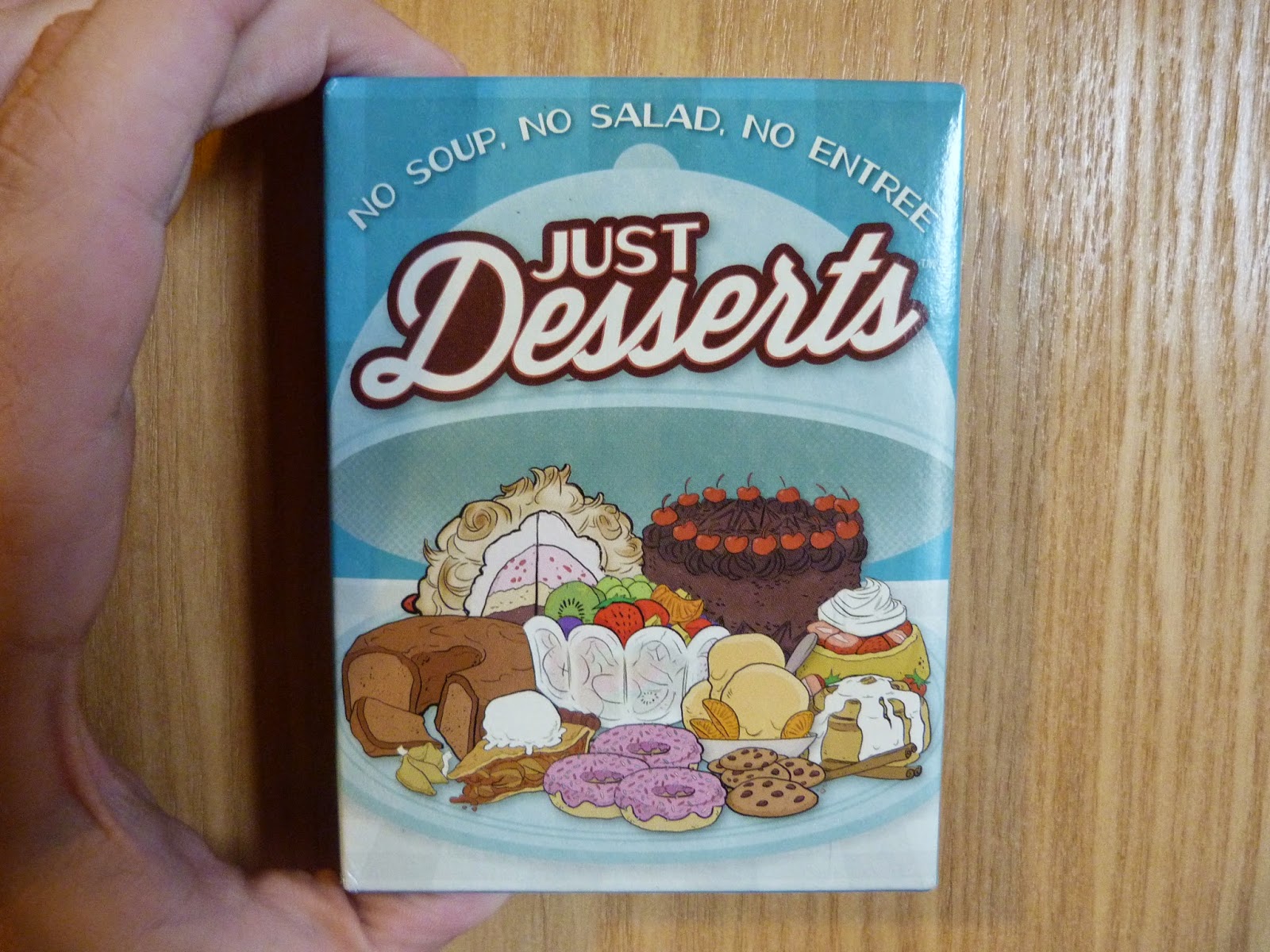 In a game of Just Desserts, players are attempting to satisfy the dessert cravings of an eclectic bunch of customers: an astronaut, some little kids, a Boston guy, a professor, a stoner who looks just like our favourite Lebowski, and so on. Each character has some favourite dessert types (like ice-cream based desserts, chocolate based ones, pastries, etc) and something they won't touch (like desserts that have peanuts or vegetables).

Players will take it in turns drawing cards from a stack of dessert cards, with the intention of collecting a set of desserts that will meet a character's needs. If they play that set, that player will score that character and take them into their score pile.

The rules are very straightforward: you either take a card, fulfill a character needs, or discard some cards to draw an equal number. And then the first player to either score 5 different coloured character cards, or 3 character cards of the same colour, wins the game. The game passes quickly, taking about 10 minutes to play.

I have to admit, I was a little reticent about Just Desserts - it all looked very random and simple. And it is, but Just Desserts is also a really pleasant, fun and sweet game! It's not a game to play with that friend who lives and breathes Agricola and Terra Mystica, but it's certainly a game you can play sitting in a coffee shop with some good friends or with your younger kids.

Just Desserts went down particularly well with some of my non-boardgamer friends. They really liked the way you could bash out a quick game, that there was almost no downtime between turns, and they kept complimenting (as did I) the gorgeous artwork by Brooke A. Allen. Speaking of the artwork, each of the 100 cards is unique and has its own illustration. Some are boring (candied ginger), but most are well done it's really nice to have that liveliness and colour as you play. 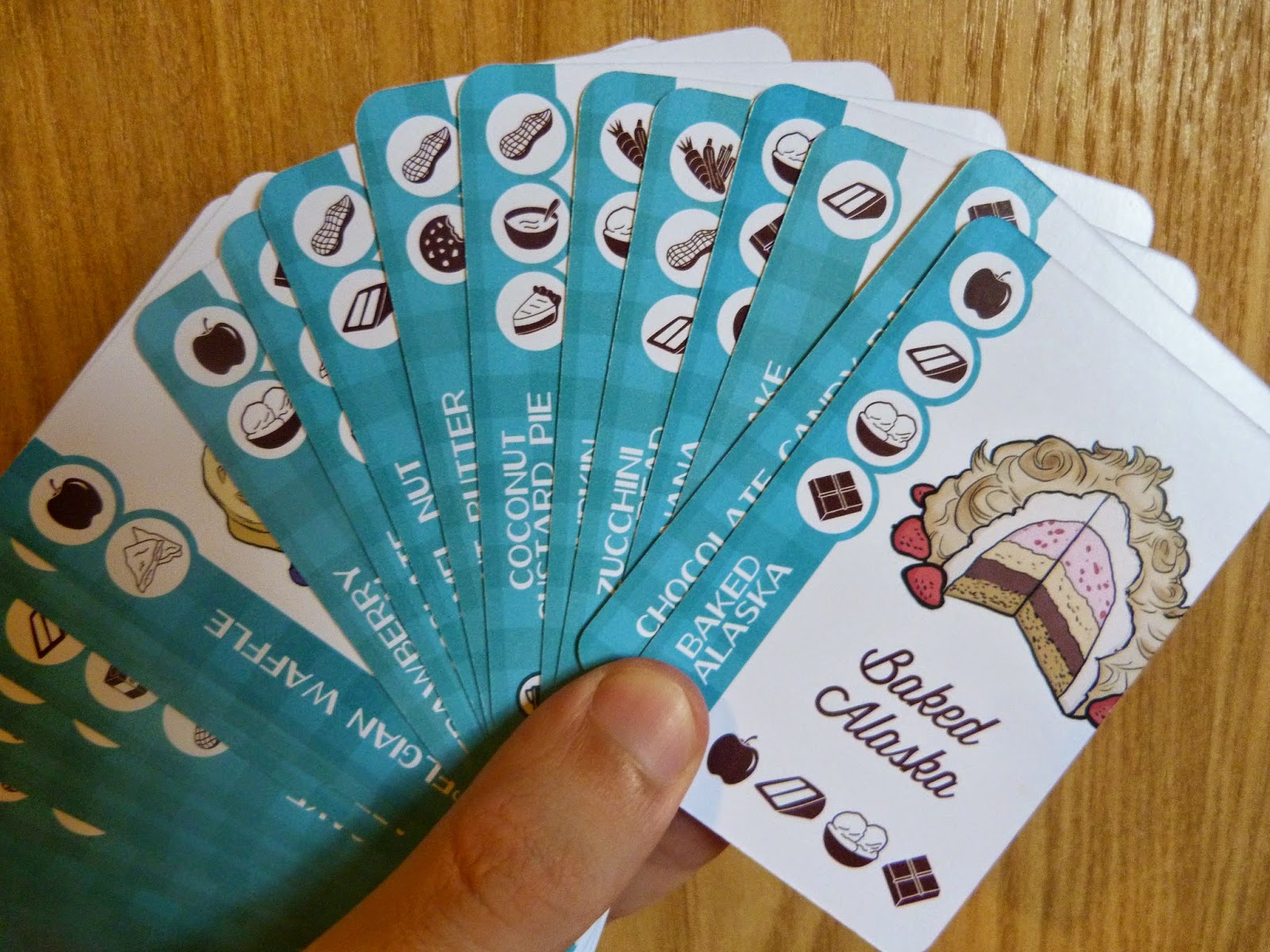 The victory condition introduces an interesting twist as the game reaches it's conclusion. At this point, players will need very specific cards to win - either a fifth character of a colour they don't already have or a third character of a specific colour set - so it is quite possible to block your opponents and it also becomes important to try and figure out which end condition you'll go for. It's only a minor thing, but that rule keeps things interesting, rather than just leaving players to grab any character cards at random.

Also, note that there is an advanced set of rules for Just Desserts which introduces more competitiveness into the game, allowing you to score out of other players score piles. We briefly tried these rules, but the competitive nature didn't seem like a good fit for the group - they seemed to force you to slow down and hoard otherwise irrelevant cards. 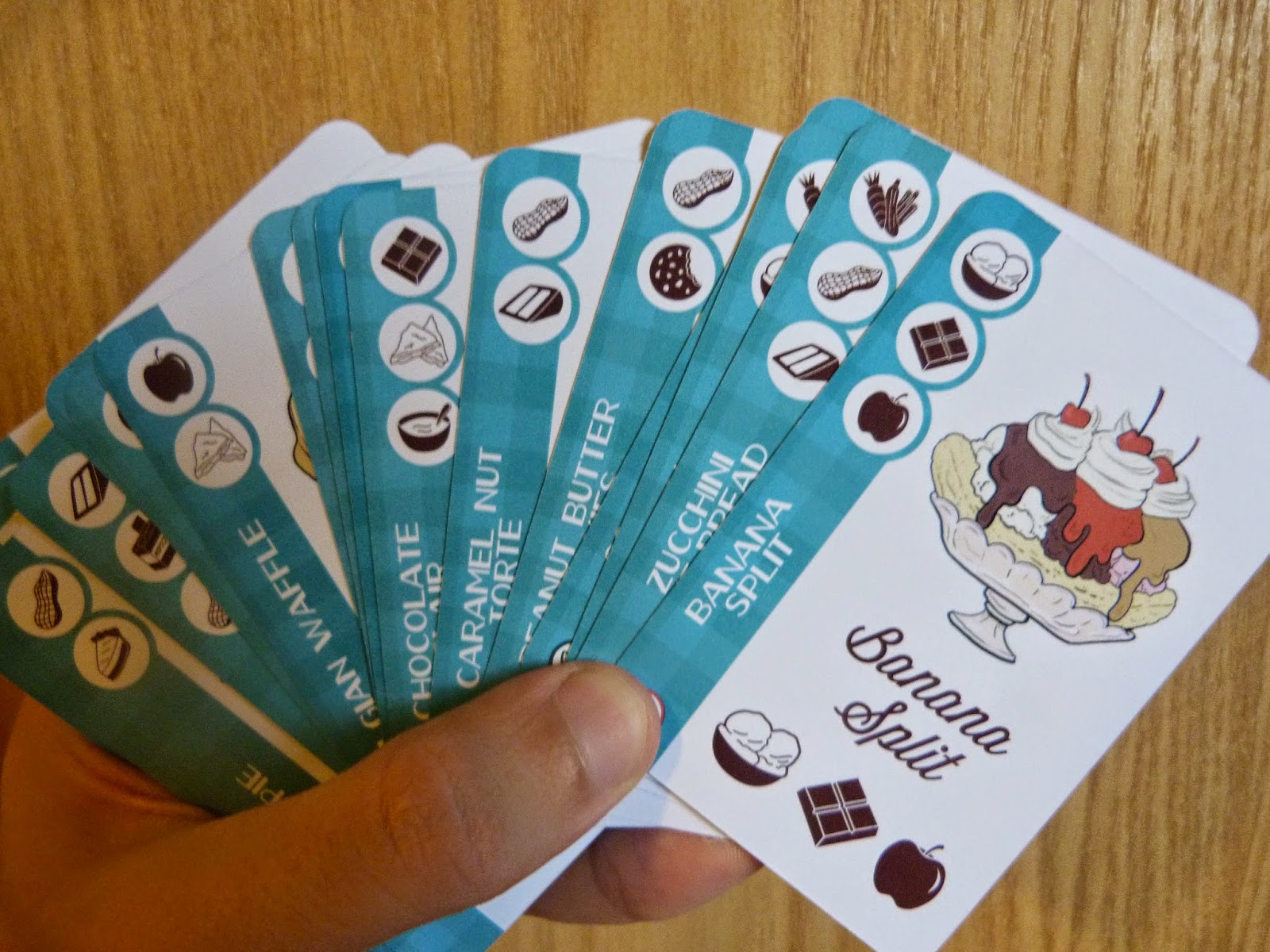 So yeah, Just Desserts small and sweet game. I would certainly rate this above similar games like Fluxx, while it still fills that Fluxx niche of quick, kind of silly, but friendly card games. As I mentioned earlier, this game is particularly suited to families with younger children.

All colours are also indicated with a symbol, so it's not a problem.
Email ThisBlogThis!Share to TwitterShare to FacebookShare to Pinterest
Labels: Cards Only, Colourblind Approval, Just Desserts, Review, Set Collection
Newer Posts Older Posts Home
Subscribe to: Posts (Atom)
RobinDavid: Where I talk about boardgames and boardgame design.