Why I'm Giving Away "Eccentric Exhibits"

Earlier this year, I released Director's Cut: The Card Game on DriveThruCards to underwhelming success, The way DriveThruCards works is they charge a print cost for each deck sold, based on the number of cards in that deck. Then the designer of the game adds their own profit margin on top of that. The print cost and margin combined is what potential customers see. In the case of Director's Cut: The Card Game, it uses 107 cards. The print cost is $8.56, my margin is $1.43, and so the final cost to the customer is $9.99 + postage. It's not a terrible deal for the customer, but it's a terrible deal for me - the margin is just too low for a badly selling game.

In May 2015, a construction management company tried to licence the game as a corporate giveaway, but balked at those same production costs. Even when ordering in bulk, the costs of the game were already too high to give myself any reasonable profit.

I knew that in order to offer better prices and higher margins on sites like DriveThruCards, and to make games more attractive to other clients and publishers, I needed to make smaller, cheaper games.

In Eccentric Exhibits, players are rival museum curators, trying to assemble the best museum collection. They do this by winning tricks over a series of four rounds. The public tastes will change and some items will only impress if they can be displayed together. An unusual scoring mechanism also means that the best items are not the most likely to win tricks, so both players must be savvy in their moves. Eccentric Exhibits is loosely based off the traditional card game, Schnapsen.

At only 20 cards in size, I was excited to bring Eccentric Exhibits to DriveThruCards. I figured I'd be able to offer it for $5 and still make a decent margin. But then reality struck. I ordered a proof copy to check how the game looks printed, which is of no small cost when you consider DriveThruCard's international shipping rates. When it arrived the colours were screwy. I would have to fix the colours, order another proof, and still might not be finished. I decided to wait and think about it.

Last week I released a print and play title, named The Martian Investigations, which costs $2 on Payhip. Over one weekend, the game made back its costs (editing, prototype printing, etc) and another $100 in profit. Whilst making The Martian Investigations was no small endeavour, it made me realise that there are audiences out there that are hungry for indie stuff and are willing to put together their own printed copies of games. Thus far, I have been erroneously behaving like getting games into players' hands always has to be a big deal and a difficult task - I told myself that I have to approach publishers, or run a Kickstarter, or at least mess around with multiple proof copies at a print-on-demand business.

I have a bunch of other finished projects that I'm more passionate about publishing than Eccentric Exhibits, so I don't want it using up valuable publisher talk-time. It's not spectacular enough for Kickstarter. And print-on-demand doesn't make enough money to be worth it. So instead, I'm giving away Eccentric Exhibits as a print-and-play, PDF. Boardgamers can get the file, print it out, cut it up, and quickly get to playing the game.

Unlike The Martian Investigations, I've marked Eccentric Exhibits as pay-what-you-want, with no minimum amount. After 74 people have downloaded the game, only 2 people have paid anything. The grand total is $7.

You can read more about Eccentric Exhibits here, and find it on Payhip, here.
No comments:
Email ThisBlogThis!Share to TwitterShare to FacebookShare to Pinterest
Labels: Cards Only, Design, Design Diary, Eccentric Exhibits, Print n Play 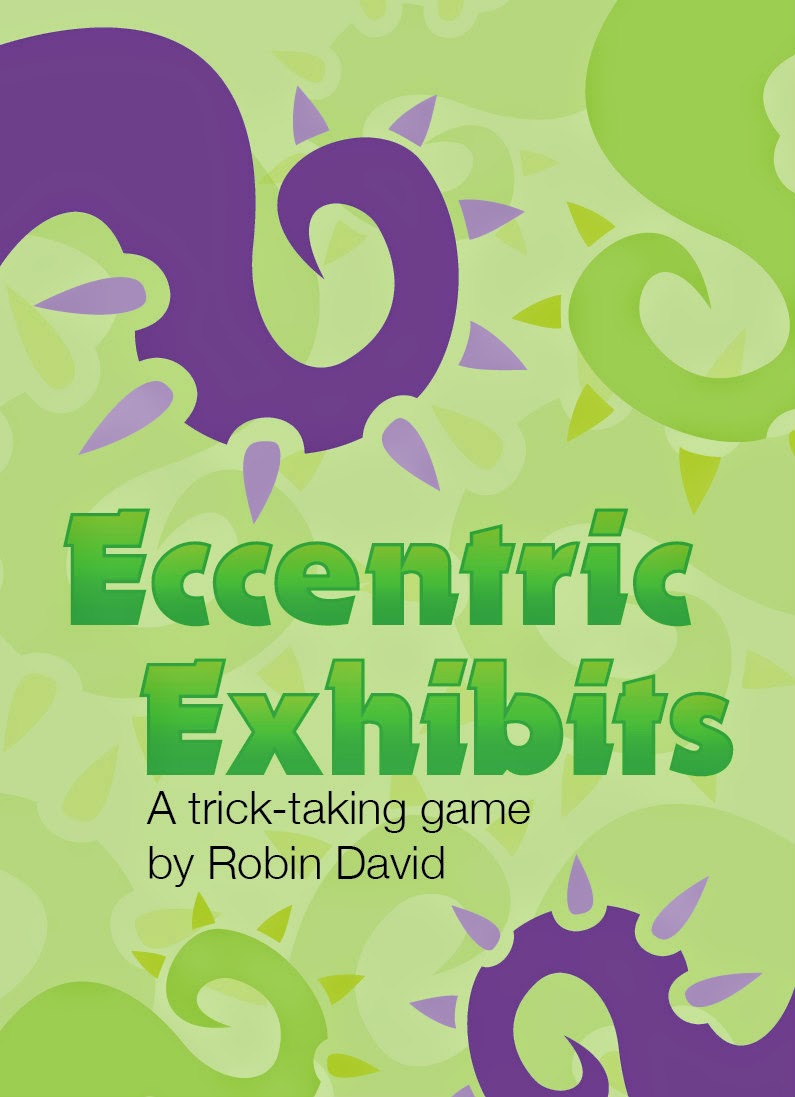 Eccentric Exhibits is a 2-player, 20-card trick-taking game. In this game, players are rival museum curators trying to arrange the most prestigious exhibitions of bizarre and unusual artifacts - unicorn hooves, kraken tentacles, books of pure evil, and alien skulls, to name a few.

Over four rounds, two players will play a series of tricks, trying to win artifacts for their museum and score prestige. The twist is that the highest scoring cards are not always the cards most likely to win a trick. So huge bonus points are available if you can deduce what cards your opponent is able to play and which tricks they are able to win.

With only 20 cards to keep track of, skills in deduction and risk management are paramount. Eccentric Exhibits is a tense, high-skill game for two players. 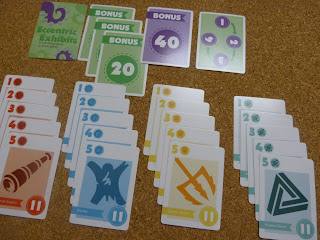 In a pocket-sized set, on only 4 printed sheets, you get:
Eccentric Exhibits is perfect for fans of trick-taking games (like Hearts or Euchre) and players who enjoy unusual themes. It is based on the traditional trick-taking game, Schnapsen.

Eccentric Exhibits is pay-what-you-want (no minimum), on Payhip.


Note: Aside from these cards, players will need a way to record scores between each round - some paper or a phone app. I wanted to include cards to tracks scores, but scores in a single game can go beyond 500 - including score trackers would have made this a very bulky and expensive package.
4 comments:
Email ThisBlogThis!Share to TwitterShare to FacebookShare to Pinterest
Labels: Eccentric Exhibits, Print n Play
Newer Posts Older Posts Home
Subscribe to: Posts (Atom)
RobinDavid: Where I talk about boardgames and boardgame design.