Litterateur is a card-drafting, word-building game. You can think of it as a little like Scrabble crossed with Sushi Go.

Litterateur takes place over five rounds - four normal rounds and one special round. For the first four rounds, players draft letter-cards into their hands, taking cards that are useful to them and trying to deny cards to their opponents. After the drafting is finished, players simultaneously try to create the best word possible using both the cards in their hands and a small shared pool of common letters. Each letter has a different point value, and this determines the ranking of the players in each round.

In a normal round, the player who scores the highest word takes three cards that have been played in that round, and places the cards in their score area. The player in second place takes two cards in the same fashion. And the remaining players each take one card each. This is essentially a second phase of drafting because in the fifth round, all the cards that players have managed to score will make up their new hands. If a player has been winning the earlier rounds consistently, they may have up to fifteen cards to use in the final round. And this is important because it is only the score in the final round that determines who wins and who loses. 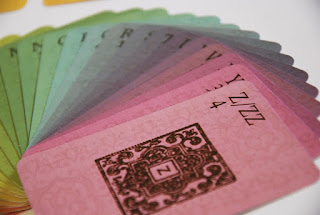 Litterateur takes between 20 and 30 minutes to play and is suitable for 2 to 6 players.

Litterateur may one day make it to Kickstarter or general release, but for now I'm giving away the black-and-white print-and-play for absolutely nothing. Please go ahead, click this link, and download Litterateur for free. Once you've tried it, I would really appreciate if you could head on over to BoardGameGeek to rate the game and leave your thoughts.

Litterateur's graphics are scans of old books courtesy of the British Library online archive. You can find it here - it's incredible. Details on the source of each individual image are here. And a huge thanks to Tiffy Moon, who spent aaages cleaning up the scans with photoshop magic. The full colour set is stunning, but I'm saving that for later.