Yesterday was my first visit to a formal playtest event - as opposed to playtesting with friends or mailing out games for blind playtesting. It was a fantastic experience. Nine amateur designers turned up to a cafe in central Dublin and we thrashed out some of our designs.

I'm not going to go into other people's games and how they played out, because I don't know how other designers would feel about me talking about their works in progress, but playthroughs of two of my games, Watermelons and AlphaDraft, were enlightening.

This is my bluffing game where players are daring one another to take cards from a face down deck which may or may not have been "poisoned". Many of the mechanics seem to work fine but two issues became apparent. 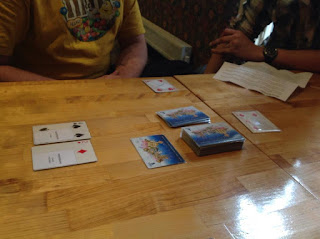 Changing the range of points on the melon cards from 1-5 to 1-3 may fix both of these problems. I also need to introduce more poison dose cards to alleviate card counting - they work well but come up too infrequently.

This is the letter-drafting, word-building game that I put together recently (which is in dire need of a name change). 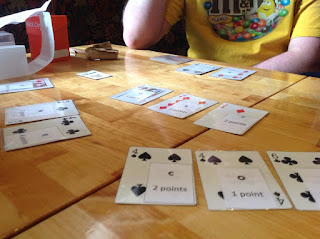 AlphaDraft went down very well with the plastest group and had only some minor problems.

A few fringe rules came up that needed clarifying -- for example, what happens if two players draw in a round? Who gets to first choose which cards they score? Secondly, what if all players draw for first place but there are not enough cards in play for them all to score the three cards that they each need?

Also, a few of the individual cards need tweaking for playability. The Z cards, for example, should also be playable as ZZ, so it can be used in a word like "buzz". With only one Z in the deck, I'm limiting some of the interesting possibilities. Same goes for letters like Q, which should stand as both Q or QU. And so on.

I was really happy with how AlphaDraft played out and will be putting together a graphic version of it within the next few days - hopefully in time for another playtest on Tuesday.
Email ThisBlogThis!Share to TwitterShare to FacebookShare to Pinterest
Labels: AlphaDraft, Design Diary, Playtest, Watermelon
Newer Post Older Post Home
RobinDavid: Where I talk about boardgames and boardgame design.