An Interview with Robert Burke, designer of "The Offensive Band Name Generator"

This week, I managed to get some time with Robert Burke, the designer of the creative party game, The Offensive Band Name Generator, which is currently being funded on Kickstarter. He was able to give me some insight into his creative process and just how he is able to keep a party game feeling fresh and fun each time you pull it out with your friends...

Robin: Hello! First up, could you tell me a little about yourself and introduce your latest game, The Offensive Band Name Generator?

Robert: I'm a relatively new game designer who has three published games and one expansion to date (Cartoona, Gnomes: The Great Sweeping of Ammowan, Battle For Souls, and a Cartoona Expansion). Cartoona is a family game, Gnomes is sort of an RPG that parents can run for their kids, and Battle For Souls is a heavier strategy card and dice game.

I don't plan my designs to fit a particular market, or design style. I design my games around an idea. So when have an idea I'm passionate about I start the process of building a game around the theme. My latest game, The Offensive Band Name Generator, came from my love of music and the proclivity I've had with other musically inclined friends to invent strange names for bands. I did not set out to create a party game, but this idea lent itself to be one.

Robin: Was The Offensive Band Name Generator inspired by any other games out there at the moment?

Robert: It was really inspired from coming up with crazy band names with friends, and how funny some of them could be. Other than that I suppose Cards Against Humanity was an inspiration because it showed me that you could do games with just words that push the envelop and that they could be a laugh out loud good time!

Robin: How did you make sure that your game would remain different from party games already on the market?

Robert: The OBNG is different because you are putting words together to form phrases, and not picking just one or two cards to fit a set question or phrase. So players have more creative freedom, and enabling creative freedom was a design goal from the start.

So for example, if you had the following 6 cards in The OBNG:


You would have a plethora of options, as opposed to just 6. With these words I could create the band names:

Or numerous other combinations that the hand of cards offers. In addition, as the game is played, players have the option to pick up cards played previously, so creativity is more important than luck of the draw, since you can be selective in order to build the most unique, fitting or hilarious word combinations. Band names work great because can they follow either proper or incorrect grammar. It doesn't matter, it's ROCK AND ROLL! 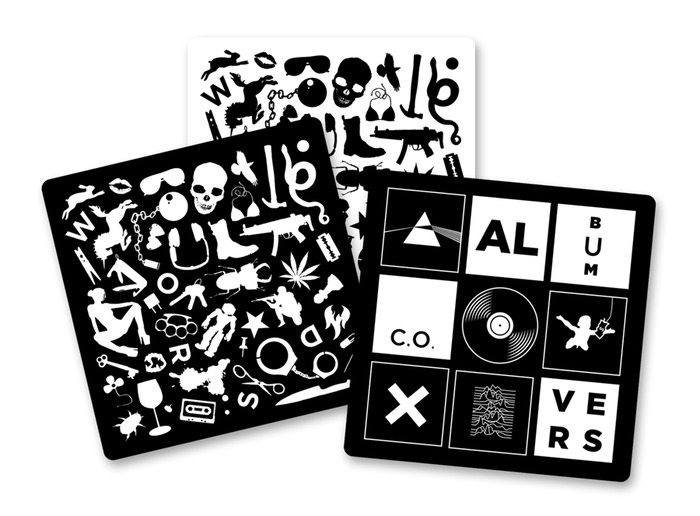 Robin: Can you talk about some of the iterations that The Offensive Band Name Generator went through? How did initial prototypes play, what kinds of issues were thrown up through early play-testing, and how did you try to solve any of these issues?

Robert: The first iteration did not work well, as sometimes you would get cards that just did not work well together. So we went back to the drawing board and added parenthesis to provide more options for many words. So instead of having the word "Dog" for example, we made it "Dog(s)", This way, a player could use either form of the word.

Later on during testing we added free word cards words like "The", "Is", "Of" etc.

We kept building on this, and added more player freedom as we developed the ruleset.

These changes greatly improved the game. But we have changed the game even further since the last prototype, which can be seen on the Kickstarter page.

The latest, and most refined version has gone further with the parenthesis. Now you will find a choices like "Hate(s) Hateful(ly)", which gives players many more options than if it was just "Hate(s)". We have also rebalanced the words to make sure every card has a noun, verb, adjective and adverb. This makes creating band names very easy to do. Finally, we have been honing the word choices for sometime, so words that we find are not used, we throw out for better ones. 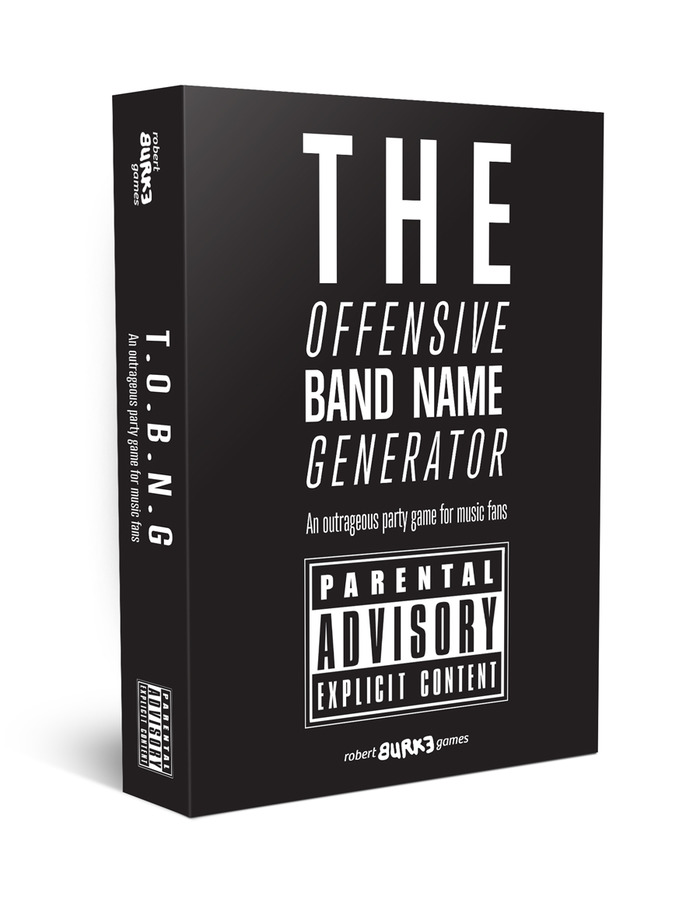 Robin: What were the biggest challenges that you faced in the design or production of The Offensive Band Name Generator?

Robert: The biggest challenge has been communicating what the game is exactly. It's hard to get a sense of how fun and out of control the game can get until you sit down and play it with some fun people.

Robin: One issue that games about creativity suffer from is lack of replayability or their content becoming stagnant. Once players have seen several great answers for a situation or have discovered the killer-card (like Cards Against Humanity's "a big black cock" card), the game can grow stale quite quickly. How have you tried to make sure that The Offensive Band Name Generator stays fresh and exciting through repeated plays?

Robert: Re-playability is The OBNG's biggest strength. With the word cards in the box players can create over 23 QUINTILLION different band names, so you truly never now what your are going to get, and no round is ever the same. You are not limited to selecting one or two cards to fit a pre-written gag. Instead, you are building your own gags from basic building blocks: words.

Robin: I think that making a game for mature audiences only can be quite a scary and brave prospect! You risk offending some people and cutting out segments of your potential market. How and why did you come to this decision?

Robert: Yes. It's definitely a game for 17+. And yes, this hurts its chances for success. But I decided early to not censor words. People can censor themselves. It is not my place to do it for them. For example, in my previous example of Word cards, "The Love Mortals" would actually be a great name for a band and is not offensive at all, but I could choose to make the name "Oprah's Beastly Nipples" from the SAME hand of cards, which would be quite offensive to some. Our play test groups have always tended to go dark pretty quick, and we have seen literal tears of laughter, so we want to keep it that way. But by doing so we realized we needed to put a 17+ rating on it, since many word combinations would not be appropriate for children.

Robin: What are your plans for the future of The Offensive Band Name Generator?

Robert: If it funds on Kickstarter, we will have it printed with Panda or another high quality manufacturer and get it into distribution. If it doesn't fund, I have no idea.

Robin: Lastly, can you talk a little about your Kickstarter experience? Has the process been smooth so far?

Robert: Kickstarter is amazing, but stressful. I love the direct feedback you can get from backers who like your idea. And if a project does not get the support it needs, you haven't taken much financial risk. So it's really all positive.

Robin: Thanks for your time, Robert, and best of luck with your project!

If you want to get hold of a copy of The Offensive Band Name Generator, or just dig up some more information, you can check out their Kickstarter page.
Email ThisBlogThis!Share to TwitterShare to FacebookShare to Pinterest
Labels: Design, Interview
Newer Post Older Post Home
RobinDavid: Where I talk about boardgames and boardgame design.