Perhaps one of the explanations of boardgaming's sudden growth lies in the recent proliferation of boardgaming adaptations on iOS and Android devices. There are some scorchingly good games out there, along with a slew of horrible (usually 'unofficial') adaptations. Over time, I'll throw some mobile boardgame reviews into the mix. I'll mainly focus on iOS, not because I like that format, but because the games seem to be wider ranging and well developed. Games that are cross platform with Android are nearly always the same anyway.

Today, one of the big hitters on iOS, Ascension! 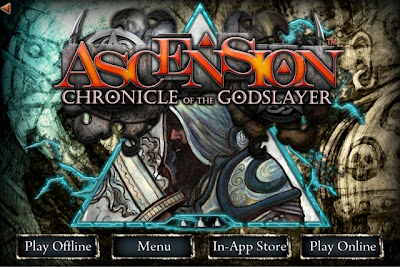 This was one of the first games I played on the iPhone, and it's certainly one of the best boardgame adaptations available at the moment. Just like on the Ascension tabletop game, you play a... a... I've no idea, actually! A godslayer? You play somebody who pits your heroes against a bunch of monsters and then buys robots and cross-dimensional machines and... stuff. But whatever, it's imaginative and beautiful and strategic. I love the original tabletop game and this is a fantastic and faithful adaptation.

In this deck-builder, you begin the game with a deck of ten cards, which provide you with money and attack power. You draw five cards and use them to kill monsters (usually for victory points) and buy more powerful cards (which have a wider variety of effects). The path to victory lies in building an efficient (usually small) and powerful deck, while preventing your opponent(s) from doing the same.

The reason why I love Ascension so much is that even though luck plays a reasonably large role, victory or loss always feels like they're down to your decisions. There are always lots of directions to take the game and different ways to develop your deck.

Of course it's not perfect. There are only so many cards in there and each card really only lends itself to one kind of use. It any one time, there are only about seven things that you can choose to do. It's crazy that a casual game like Smash Up, despite its looks, allows you to use your cards in more varied manners and forces you to make some deeper long-term decisions than Ascension. Having said that, the limiting element of how cards are played is what lends Ascension to mobile gaming -- decisions are quick and their effects are often immediate, and that is exactly what you want in a ten minute game.

Secondly, if you want big victory points from your cards, which are only scored at the end of the game, you have to suffer with a plump, less efficient deck -- less efficient because you will draw your good cards less often in a large deck. This is a similar feature to Dominion, where claiming victory points gives you a weaker deck. It's deliberate; it requires strategy; that doesn't mean I like it! The opposite to this would be found in a game like Copycat, which has some of the most exciting deck building I've seen so far. In Copycat, your deck can end up being a crazy seven-card victory point machine -- every round you draw the same cards and rack up huge points -- and that feels awesome! In Ascension, my deck never feels like that.

There are online features too. They're fine-pretty much standard stuff. I've only tried playing this with two-players and it was a seamless and fun experience.

If you have an iPhone, I think Ascension is more or less required. It's fun, quick, beautiful and just deep enough. I believe an Android version is on the way.

Nothing to report. Colour doesn't factor into Ascension, with all major components and concepts designated by symbols.
Email ThisBlogThis!Share to TwitterShare to FacebookShare to Pinterest
Labels: Digital
Newer Post Older Post Home
RobinDavid: Where I talk about boardgames and boardgame design.