Dice on Fire Review: Sentinels of the Multiverse

Well this has got to be my favourite theme: superheroes! After decades of fighting supervillains in my imagination I finally get to live out some dreams... through, uhh, some cards. Whatever, I don't care - I'm still excited! Let's check out Sentinels of the Multiverse! 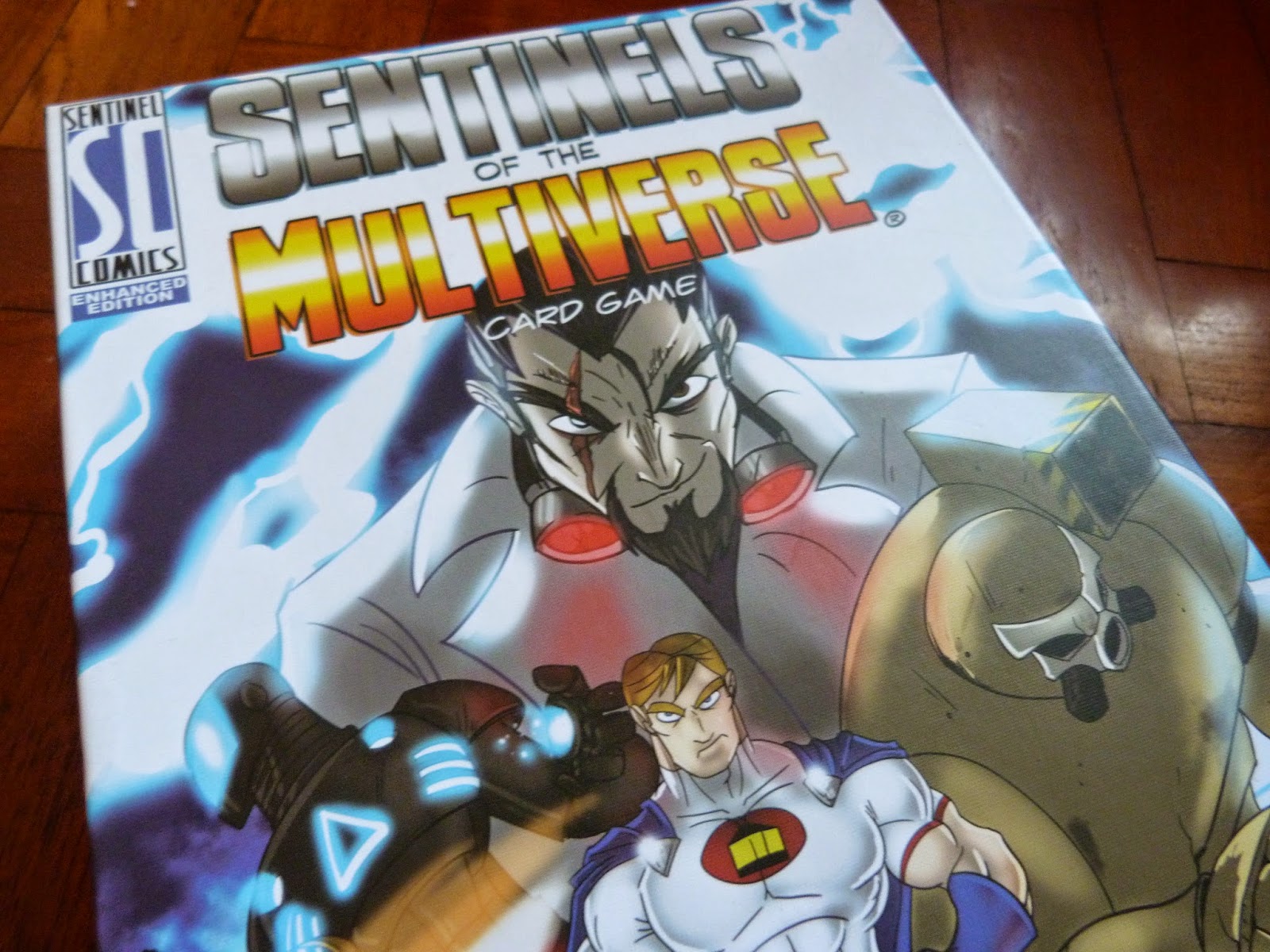 Well for starters, Sentinels of the Multiverse gets bonus points for a super badass name, but enough of that - you probably want a little info on how things are played.

What we have here is a purely card-based game with players working as a team, playing their cards to take down an ultimate bad guy, who is controlled by the game itself. All the while there are various environmental effects going off - like monorail disasters or attacking dinosaurs. It's all a bit chaotic and random and loony, but works pretty well.

So each player picks a superhero character - which comes with it's own unique deck and character card. There are ten heroes to choose from in the base game and all seem like fun parodies of existing comic book characters. Each character has their own unique fixed deck which you play cards from and subsequently, all of the characters have their own unique play styles. Each round you get to draw a card, play a card from your hand, and use one of your powers. Some cards have lasting effects protecting you and your friends from damage or buffing your abilities, some are one-shot attacks, heals or whatever, and some cards and powers are all-together weird - destroying card types, causing splash damage, leaping in front of attacks, etc, etc. 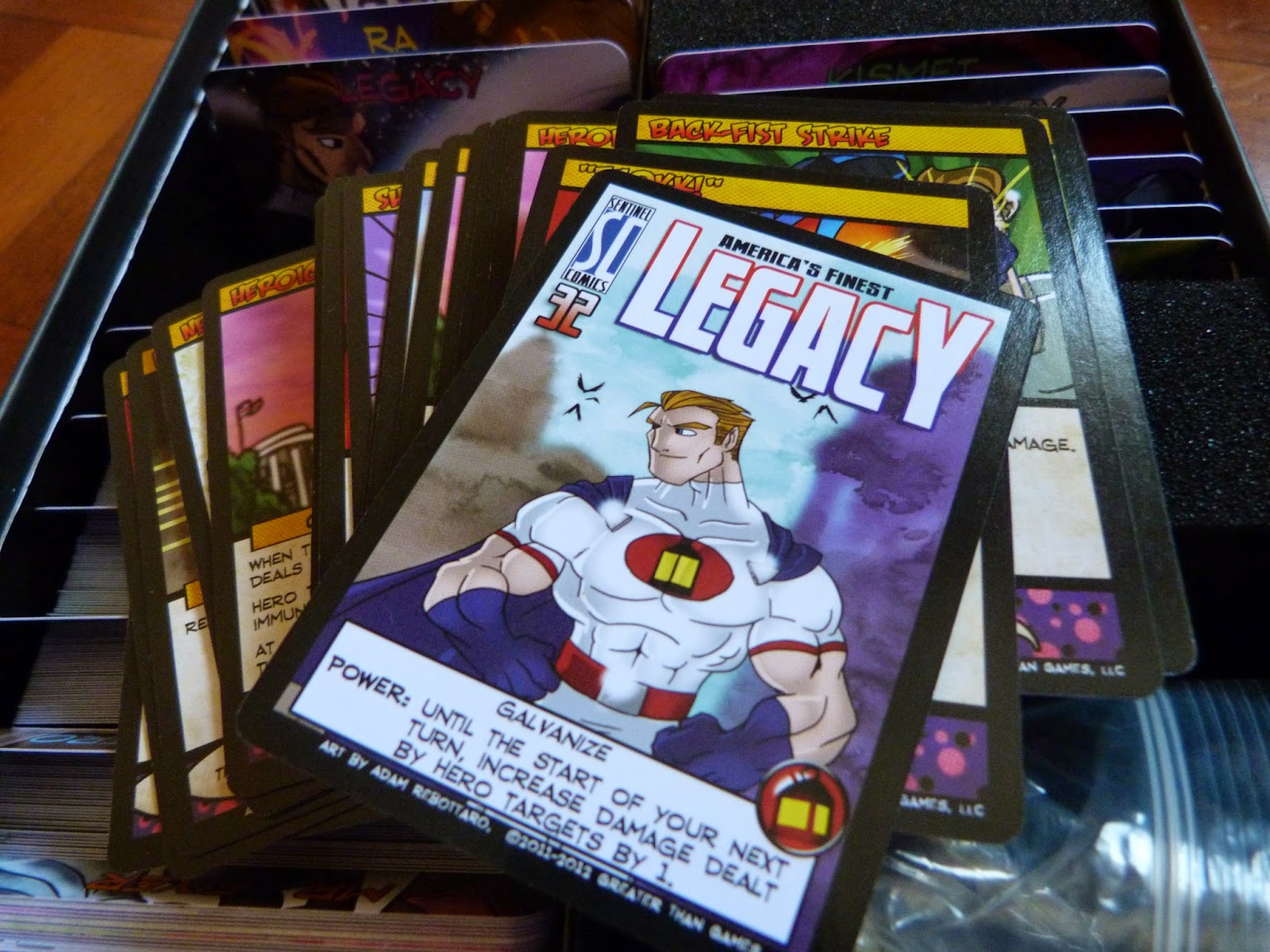 Then each round the supervillain (you pick one from the four available) gets to go. By default this means playing the top card of the villain deck and enacting whatever pain is contained within - perhaps damaging the heroes, calling forth minions, destroying hero equipment and so on. 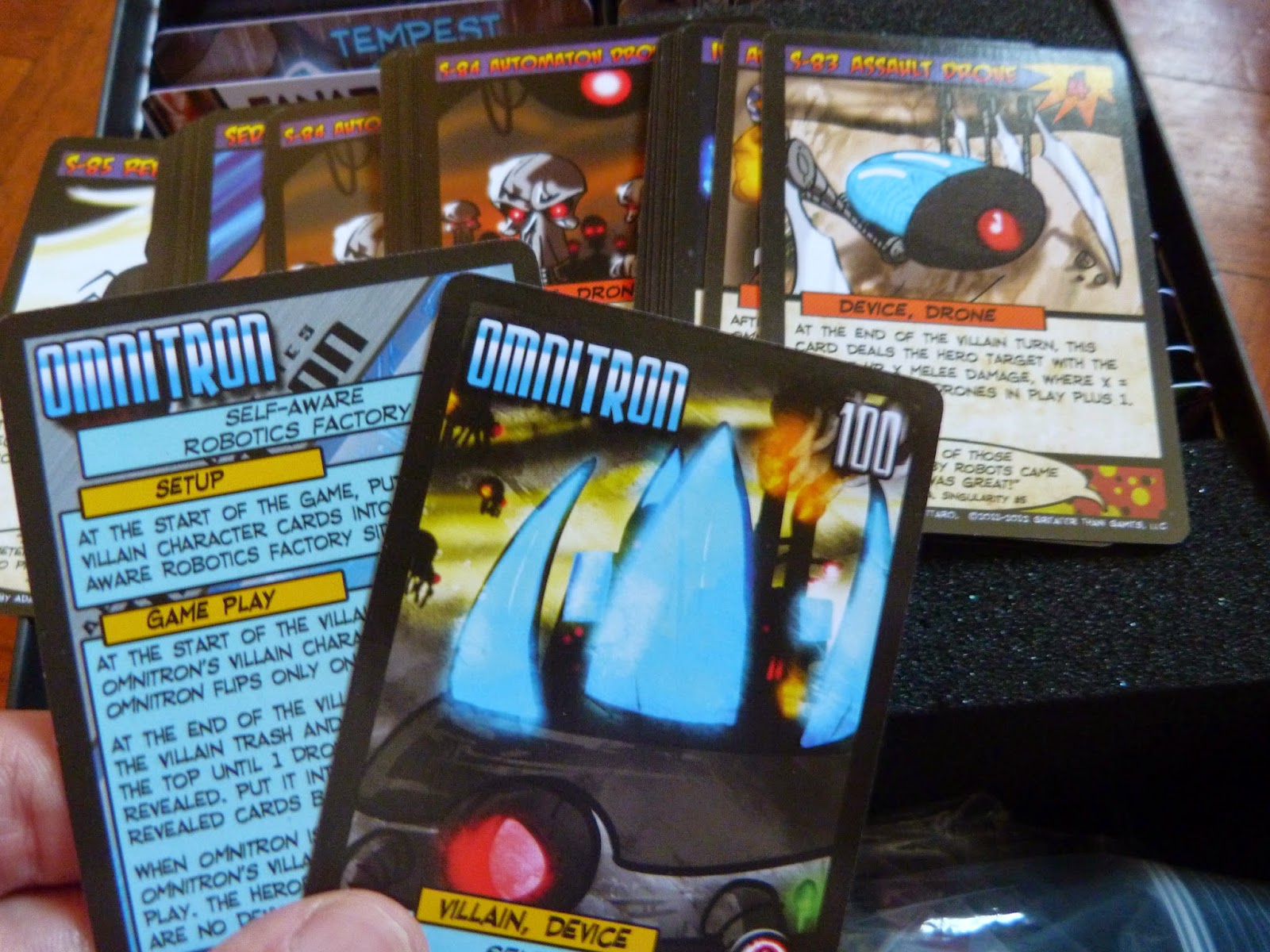 The third variable is environment. Which varies from city-based, to prehistoric times, a moon base, or Atlantis. A environment card is flipped and again, some varied action results from it. All in all pretty simple. But the multitudes of combinations and choices facing players mean such simple mechanics are complex to play out and a fun challenge. Things get increasingly tense as players co-operate to take out the ever more dangerous bad-guys and we build to an all out crescendo of...

Honestly, I don't know what to say. I've never been so torn up over a game and loath to criticize it. Sentinels has got so so so much wonderful potential, and sometimes it truly is wonderful, and then sometimes it just sucks so so much! The game is wildly unbalanced for a start, meaning that depending on your character selections, you can have the easiest match imaginable or a torturous slog to inevitable defeat. Depending on the enemy card-draws, things can just get ridiculous - "destroy all equipment cards" is one such an effect and whilst it sounds harmless enough, if you're an equipment based character like Absolute Zero, that enemy attack might set you back six or seven turns of hard work. It's ludicrously frustrating and hardly makes you feel like a superhero.

A few turns in and the baddy can easily land seven damage on you, whilst you can maybe heal three or enact four. It's brutally tough.

But I still enjoy it. Half the time it's still awesome. I'm still totally torn up about how I feel about it, but I still keep coming back. This is the most unhealthy relationship in all of boardgames.

Nothing to report. Colour isn't used for anything other than decoration. Sentinels gets my colourblind player seal of approval.