I'd heard a bunch of stories about Love Letter, the mind-games between players that fill play sessions, the way it's initial printing sold out so fast, and, most often, that it only has sixteen cards. I was so intrigued, I had to check it out.

In Love Letter, you are a potential suitor the of the princess and you are trying to convince others in the castle to deliver your letters of affection. How sweet!

With four players, one card is immediately discarded, face down, and the then everybody is dealt a card each. The first player then takes a card, so they hold two, and plays one, following the instructions on the card. The round ends when either all other players have been knocked out of the round or when there are no more cards left in the draw pile. In the event of the latter situation, the player with the highest number on their card wins and the winner gets a little red cube. You play until somebody has won four rounds and overall, you're looking at around fifteen minutes of game time.

So surprisingly, there's a fair amount of strategy in this simple game. Because your card choices are so limited, a lot of the gameplay comes in the form of bluffing, misdirection and a hefty dose of luck. Even though luck plays a major part, a good player can often maneuver out of a bad draw with some bluffing.

Each card is unique enough in it's abilities and none should leave you confused. Some cards allow you to look at another players hand, while some allow you to guess another player's hand in order to kick that player from the round. Some cards make you immune to attack for a turn while others allow you to redraw your hand. There's a nice variety to the cards, they're very simple, and every card has it's noticeable benefits and drawbacks.

I like this game with four players. At this number, there is enough deduction and sleuthing to keep everyone occupied. Because the game is simplistic, a lot of the fun comes from player interaction. There's a lot of yelling and swearing when you get kicked from the round. There's a lot of wry smiles as you narrow down who a player could possibly be and a lot of sweating when you realise that you've been discovered.

At first, I thought this game would be one of those only to be played with close friends. You need to spend a good deal of your time reading reactions and trying to figure out ploys -- "Did they play the Countess because they have the King, or do they just want me to think that?" -- and you will almost certainly get sworn at! But when I pulled this out at a local game club recently, while waiting for other players to arrive, I had a ton of fun with a bunch of strangers. None of them had played before, but within a couple of rounds, they were down with it, and I ended up losing horribly!

No complaints here. The cards are pretty standard, if maybe a little on the thin side. The score cubes are basic wood and there's a nice velour pouch to store everything in. I think the pouch is a little tacky, personally, but that's not a big deal. I'd have liked something a little less... embarrassing. 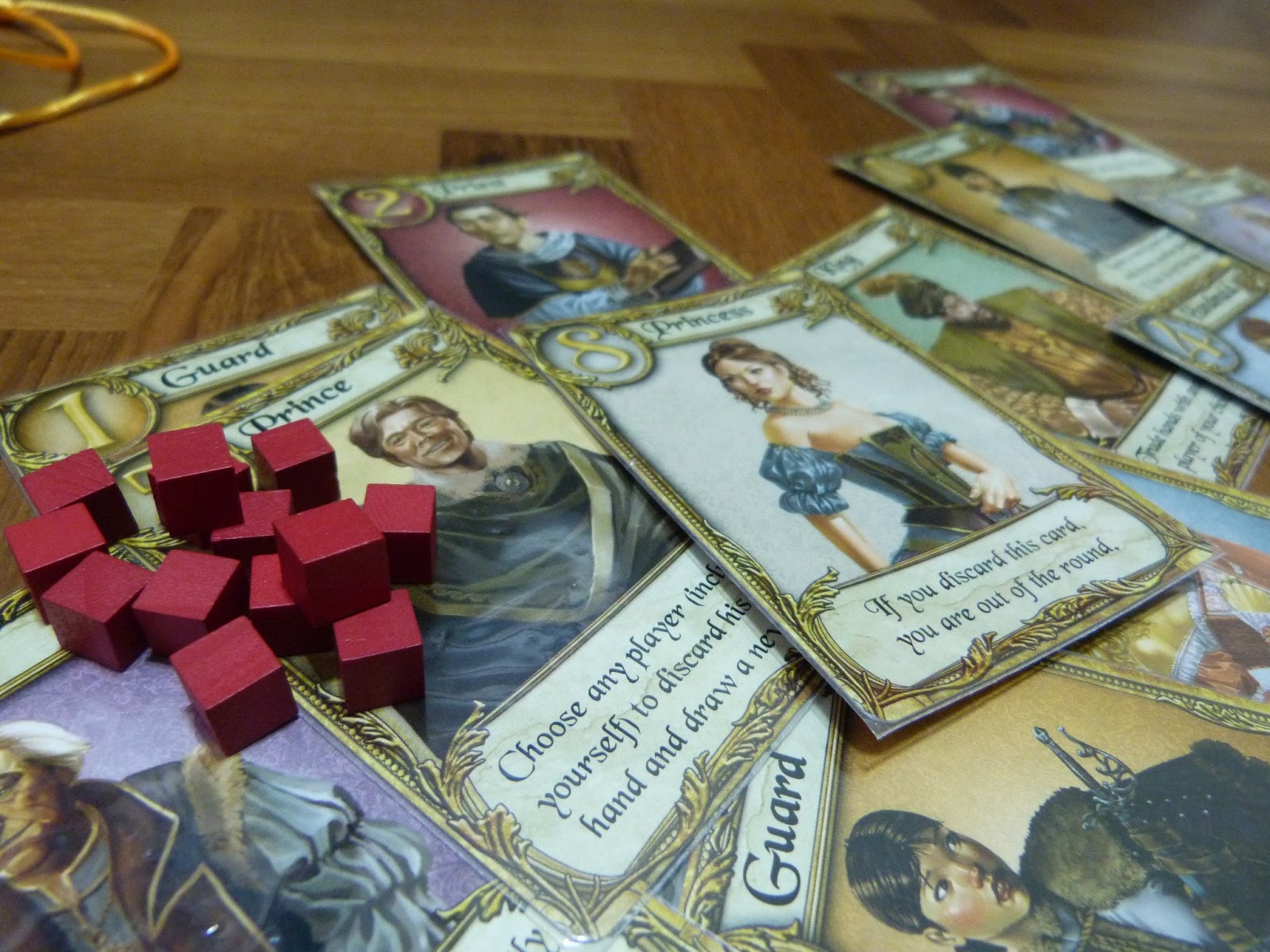 I really can't recommend Love Letter enough. It's definitely no more than filler material, but it's so charming and fun, you'll no doubt keep pulling it down from the shelf. It's small enough and simple enough that you could pull it out at the pub, if you're so inclined, and maybe one day I will.

I think I paid around $16 (Singapore) for this, which makes it probably the most expensive game, per card, that I own, and it's still a bargain. I'm going to be playing this for years to come, I'm sure. 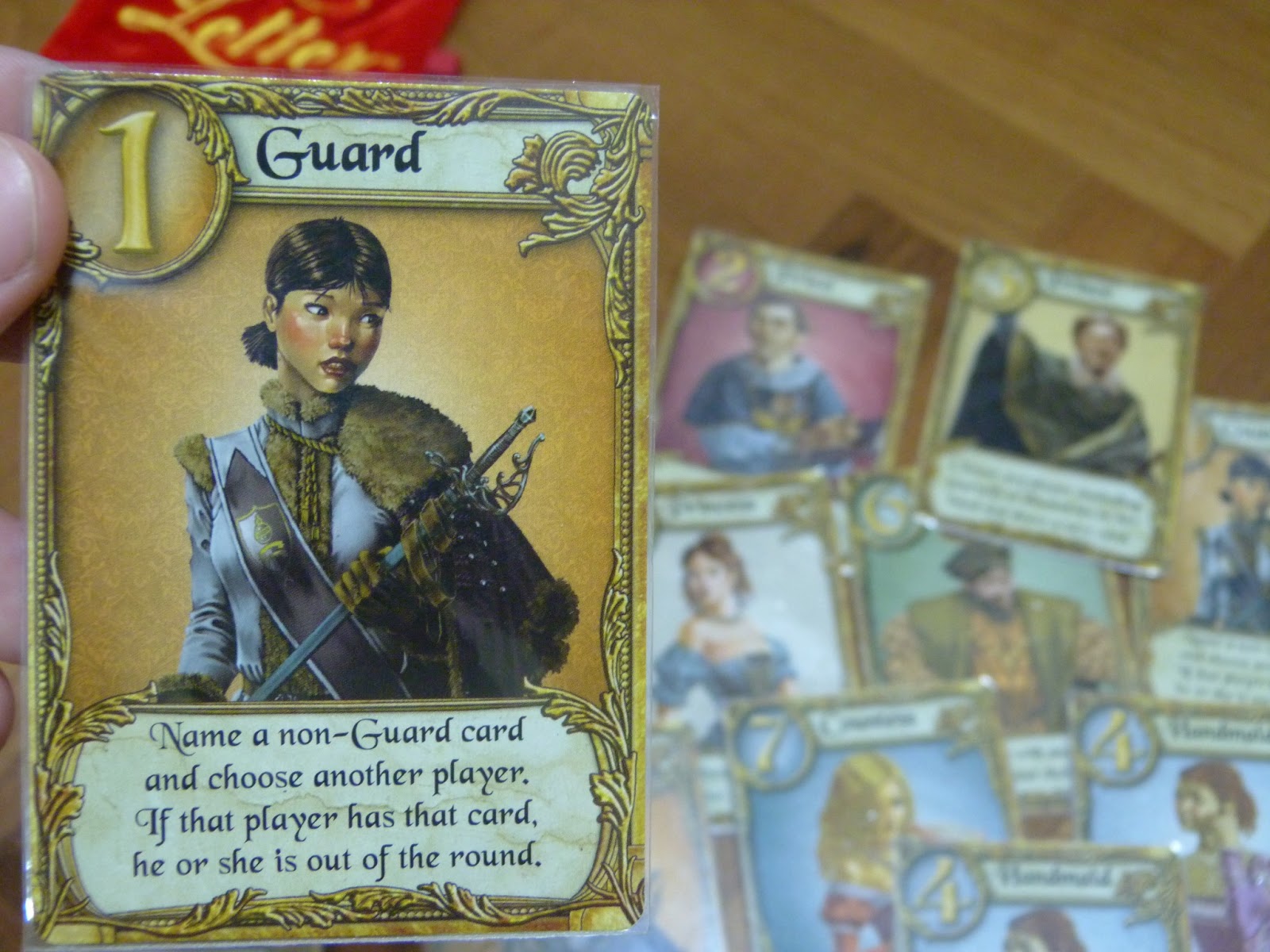 Nothing to report. Colour doesn't play into the game at all, so go right ahead and enjoy yourself!