Guillotine was a really pleasant surprise pulled out by a gaming buddy while we were waiting for others to arrive at a recent gaming session. "Do you have anything for two players with ten minutes to spare?" I asked, and this was the response. Lets roll! 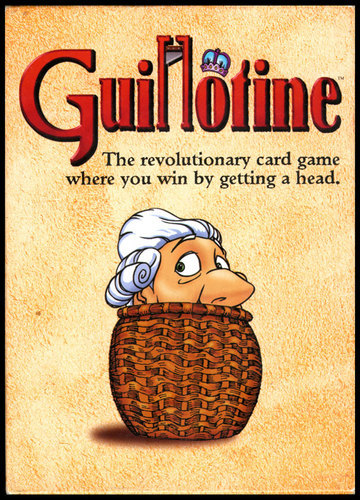 So here we are, in Revolutionary France! We've stormed the Bastille, rounded up the nobles and now it's time to chop off their heads! Can you tell how much I love this theme? It's an incredibly odd choice.

We set up execution day by lining up twelve nobles (as well as their royalist sympathisers and couple of innocents thrown in too). Players then take it in turns, playing a card to change the order of the nobles and then finally taking whichever noble is closest to the guillotine. Nobles are worth different amounts of victory points, depending on who they are (Marie Antoinette, for instance, is worth a whopping five points) and a few have special effects, such as moving in line, awarding bonus victory points, allowing a player to win a second noble, and so on. Some characters are worth negative victory points as they are unfortunate innocents who seemed to get caught in the crowd (or more likely in Revolutionary France, were executed based merely on suspicion)  -- obviously you must try to avoid being responsible for their deaths!

So we draw an action card, play an action card from our hand, and claim the noble closest to the guillotine. Then it's the next players turn.

Once we make our way through twelve nobles, the day (round) is over and lay out twelve more for the next day of executions. After the third day, we count up our victory points and figure out who is best at killing those rich bastards.

There isn't really a whole load of strategy to be spoken of in Guillotine. Individual action cards can be quite powerful, which means that it can be tough to predict how things will turn out when it becomes your turn again (if there are, say, three or four of you), so Guillotine is more a reactionary game, rather than a strategic one. You just make sure you hold on to some cards that let you move the character in front of the queue back one, and then if a sucky noble lands on your turn, you can force the next player to take that noble. I don't mean to make this sound stupid, but it is quite a simplistic form of fun.

How It Plays Out

So I've played Guillotine with both with two and four players. Two players, by far, seemed to be the most fun. With four players, player interaction felt far more simplistic -- you can pick on the person to your left, but there's no way for them to reciprocate, which kind of blows. With two, you get a nice back and forth of actions and it's far easier to plan moves ahead of time.

Even with four players, games only take about ten minutes and are very fast paced. Players laughed at some of the silliness and caught the core mechanics very quickly. By the second round, everybody was comfortable with what was going on.

The thing that immediately sold me on Guillotine, is the inclusion of a small cardboard guillotine in the box. It's almost completely useless, simple indicating which end of the line we take nobles from, but adds a lot of character to the whole experience. Guillotine is a perfect example of how a little bit of extra production effort can make or break a game.

The cards are all fine and functional and include some great artwork -- particularly the action cards, which usually feature goofy French commoners.

There is a problem here, albeit a small one. Each card has an associated colour, indicating if it's a noble, a sympathiser, or an innocent bystander caught up in the crowd. Several action cards only apply to blue characters, purple characters, green characters, and so on. This did spoil my experience a little bit and it wouldn't have been difficult for the makers to give the characters some symbol as designation. This colour issue isn't a game-breaker though.

Guillotine is plenty of fun for a ten-minute filler. It looks cool on the table, but aside from that, doesn't really stick out a whole load from the competition. For a comparable game with more player interaction and twice as many laughs, you may want to head on down to pre-Revolutionary France and hit up Love Letter instead. It's about the same price and fills a similar niche.

But for me, Guillotine will likely find itself into my collection, one day. Unlike Love Letter, which is a game you might play over drinks and needs three or four players, Guillotine is a game you play after the more hefty brain-drainers and is best fitted for two. It's nice, quirky, fun and worth ten bucks.

You may want to check out Guillotine on Amazon.com