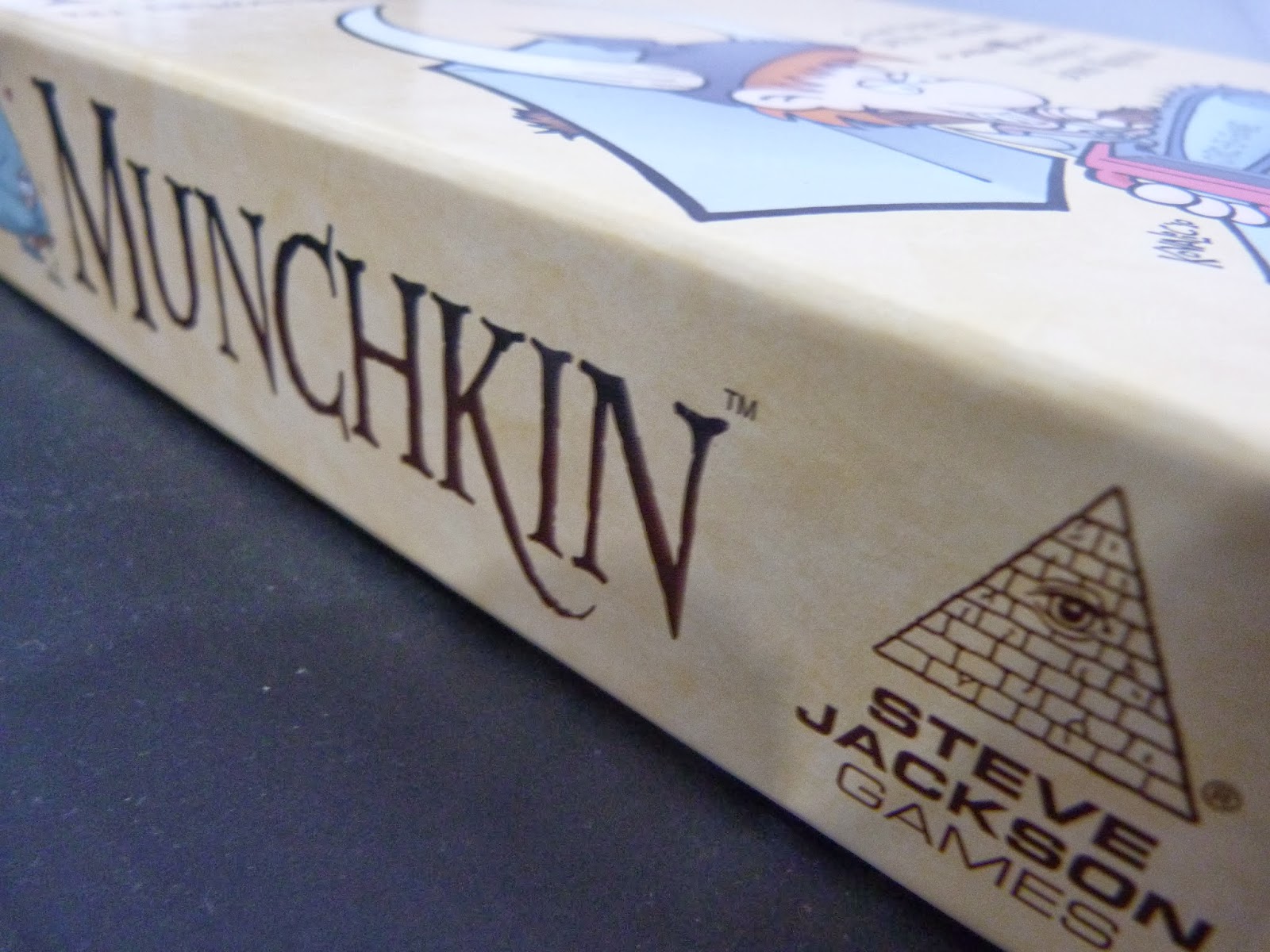 Here’s a game that’s so popular, it hardly needs a review (but I'll still give it a quick one!). Simultaneously loved and hated in the boardgame community, yet immensely popular. Just how does Munchkin manage to reach such heights of success?

Quick disclaimer: I'm not going to look at the business model behind Munchkin. Instead, I'll be looking at the game from a design aspect and seeing how that has influenced the game's popularity.

Munchkin is the immensely popular card game which parodies fantasy RPG’s like Dungeons and Dragons. Utilising the RPG tropes we are all used to (if not from these pen and paper RPGs themselves, then tropes from fantasy videogames like Baldur’s Gate and books or movies like The Lord of the Rings), players take the role of competing adventurers, delving down into dungeons, fighting off monsters, collecting treasure and leveling up their characters. It’s filled to the brim with backstabbing and family-friendly silly jokes. 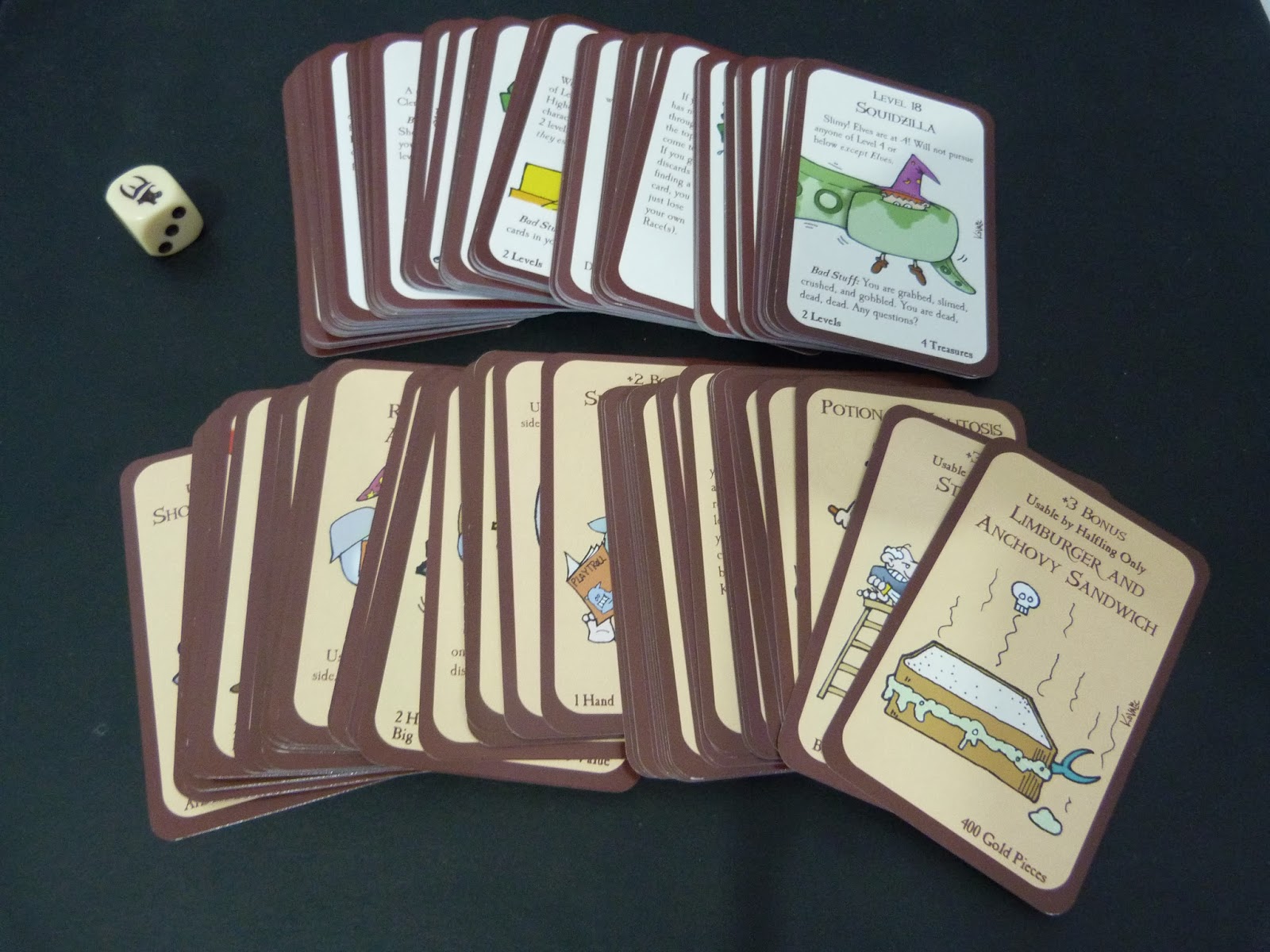 So the gameplay of Munchkin is very simple. On your turn, you turn over a room card, to indicate that you are delving deeper into the dungeon. On that room card may be a treasure (awesome) or something similar, or there may be a monster, which you then get to fight! Defeat the monster and you get to level up your character. The first player to reach level 10 is the winner. Simple stuff!

Treasure may take the form of armour or weaponry, which will make your character stronger (or may be sold to level up again, if you can get enough cash together). You may also find a card which lets you choose a specific character class (like the warrior or ranger) or race (like the elf or dwarf), all of which lets you balance various strengths and weaknesses.

If you encounter a monster (or alternatively, choose to fight a monster from you hand), you take a look at the monster's strength. You then try to match that strength by adding your own strength (your level number) to the strength bonuses offered by your equipment, class and race. Beat the monster and you go up a level and probably gain some extra loot. Face defeat at the hands of a monster and various bad stuff might happen depending on the card. Maybe you’ll lose a level, or lose some equipment, for instance. 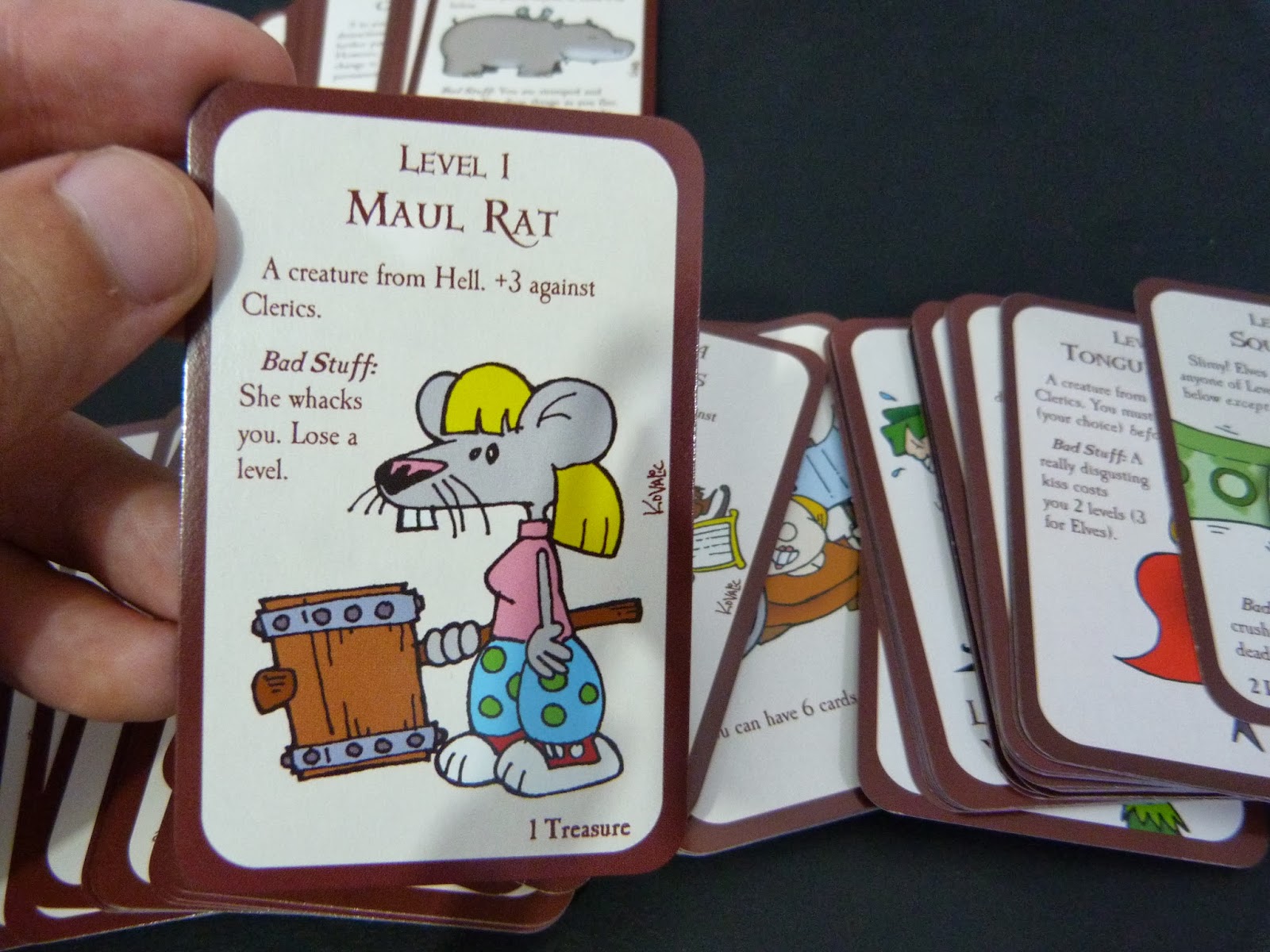 The real fun comes with the complications players can throw at each other during combat. For instance, when another player is fighting a monster, you can sabotage their battle by throwing a modifier card on the monster (the "Enraged" card, for example, gives a monster an additional 5 strength), at which point that player might have to respond by throwing in their own strength modifying cards. If the monster is too strong to defeat, that player can call upon other players to help out, offering those players various incentives (“You can keep the loot we gain from this encounter!” or “I’ll give you these sweet-ass boots! They’ll look ace on your elven archer!”). There can be a feeling of immense gratification upon defeating a particularly tricky foe, or watching another player get totally crushed by flying frogs. 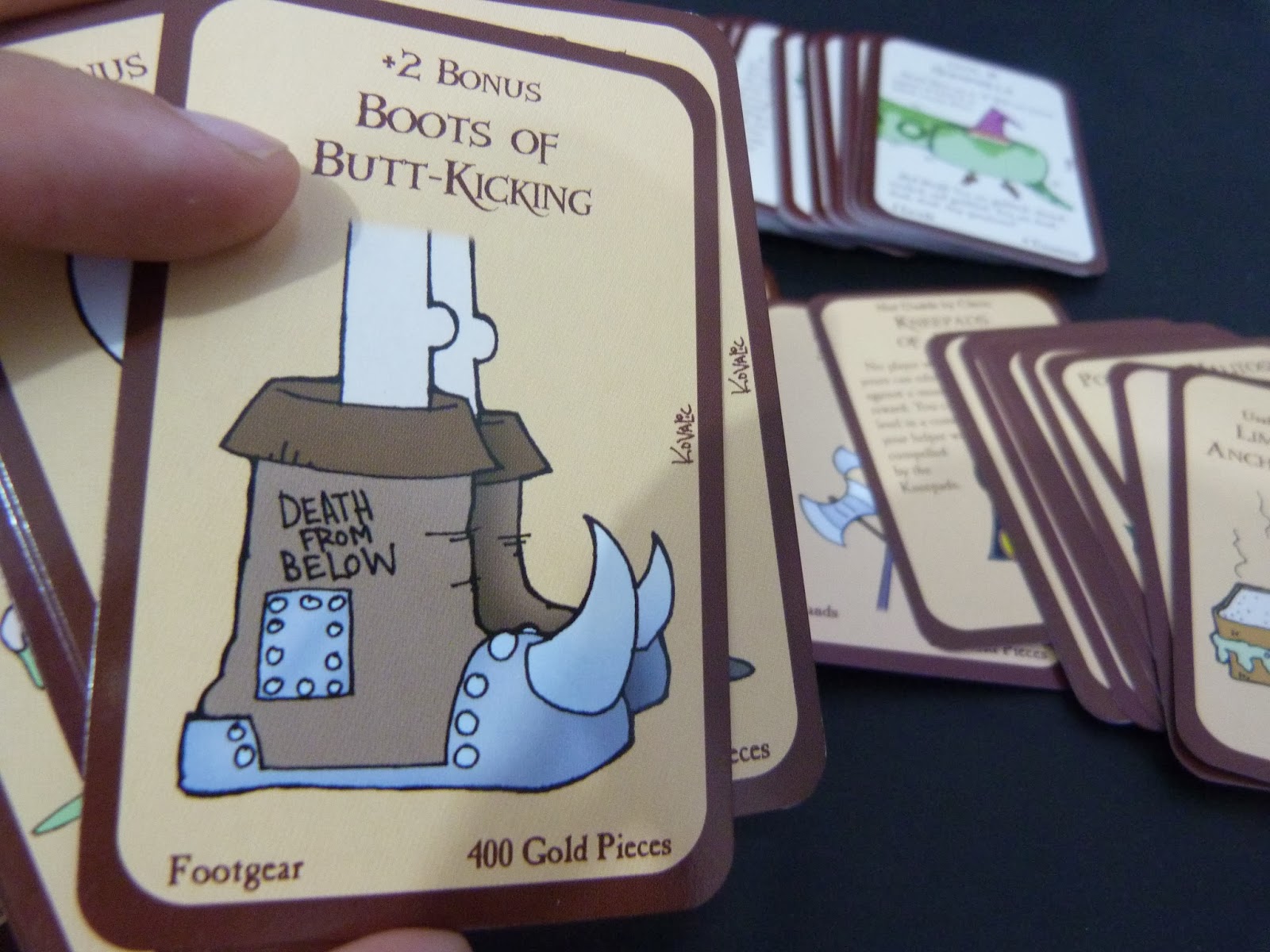 Munchkin encourages a high degree of sabotage and backstabbing, which can be great fun in itself, but the game’s objective (a first-past-the-post objective of reaching level 10) really does not work well with this mechanic. Whenever a player gets too far ahead in their level number, all other players will immediately jump upon the lead player, sabotaging their battles and refusing to help them out, understandably. That player may be forced to drop a level or two, and then someone else will be in the lead, who will subsequently be ruthlessly attacked. What ends up happening is that the game reaches the point where every other player has been held back at crucial points and now everybody is level 8 or 9 and thirty minutes of this most predictable late-game backstabbing has passed.

And then at the end, it’s all just a game of luck – you cannot negotiate with anybody to help you reach the coveted level 10, so you have to either hope for a really easy enemy to come out and hope that you get a bunch of strength boosting treasures in your hand, or hope that a fairly easy enemy comes out and that your opponents have used up all of their sabotage cards on another player. As you can expect, winning under these circumstances is immensely unsatisfying for most players (though, granted, usually more satisfying that counting up victory points, like in many other games).

It’s all just a bit of a wash by the end. Not to suggest that getting there wasn't fun! 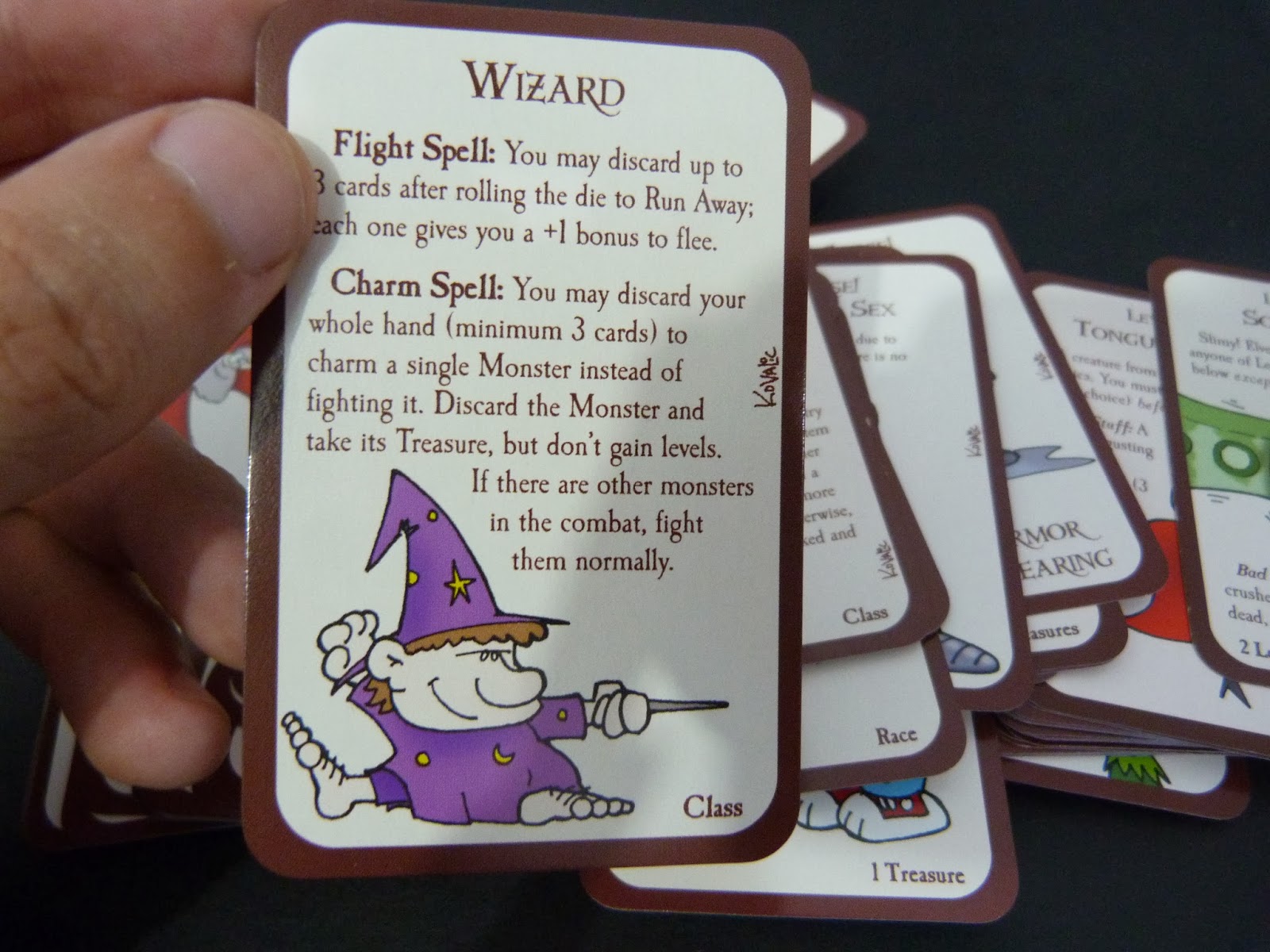 So why is it one of the best selling games on the market?

Now here’s where I think we can learn a lot from Munchkin – particularly if you are a game designer (or a wannabe game designer like myself). There are several things that Munchkin does really well.

The original game of Munchkin uses a comedic fantasy RPG theme. I actually hate most fantasy stories (I find that they're usually filled with dull kingly characters with long hair, boring old swords and magic and shit with grandiose names), but I can appreciate the popularity of the fantasy theme. I understand that most people enjoy books, movies and TV shows like The Lord of the Rings, Game of Thrones and Star Wars (yes, it’s fantasy – it uses loads of magic and other bat-shit crazy stuff and set in an ancient times in a galaxy a long way away). People can immediately connect with fantasy, much more so than they can with science fiction and far more easily than they can with many other typical board game themes (train industry giants and old-times European farmers…). These are just generalisations that I’m making, but I believe that a fantasy theme is a safe bet if you want to achieve financial success. You see, few people will be turned off directly by a fantay theme. Unlike science fiction themes, biblical themes, Cthulhu themes, and so on. 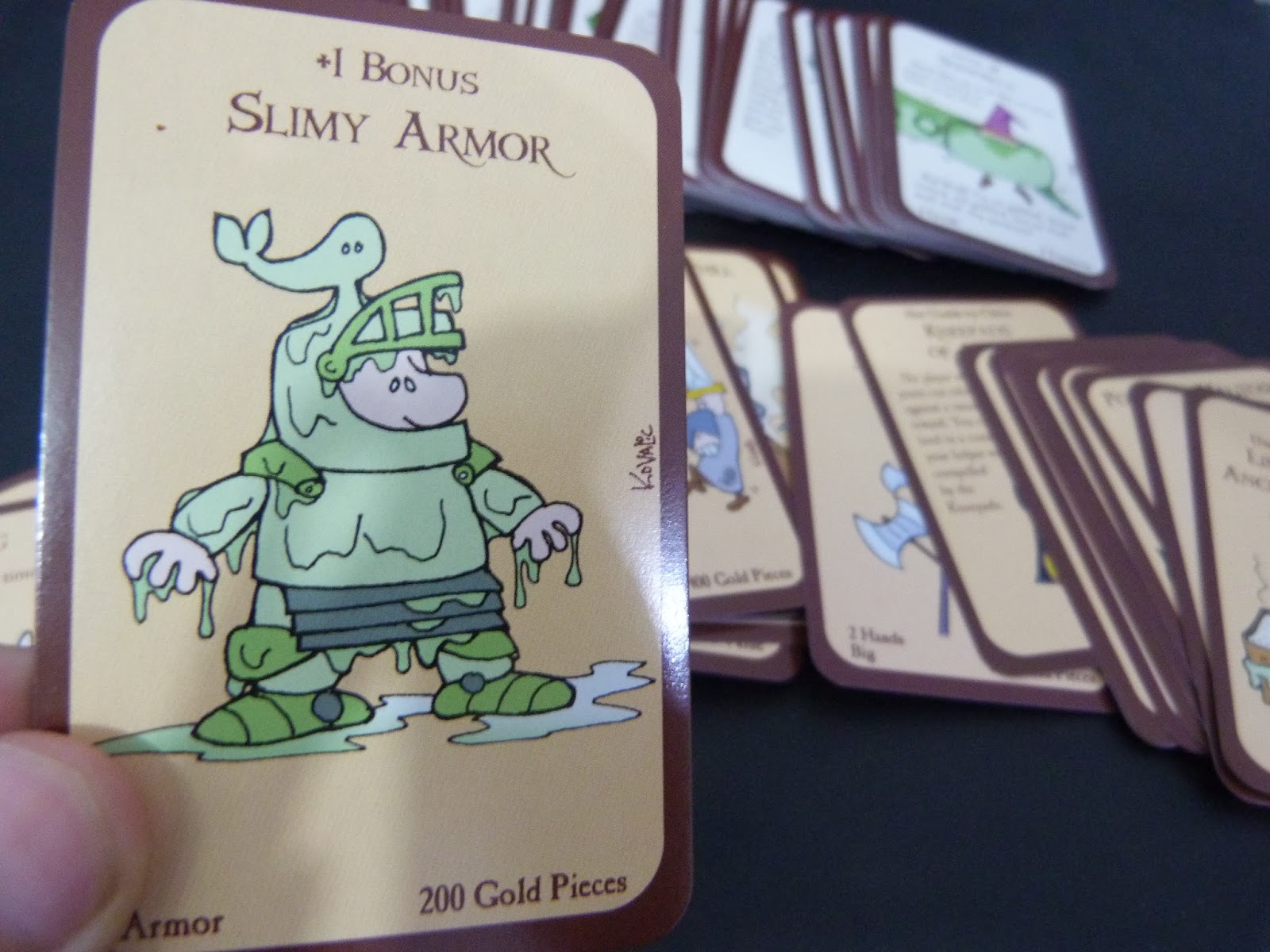 Munchkin is able to appeal directly to those who don’t play a lot of board and card games because it is very easy to pick up and understand. The text on the cards is usually very straightforward and you can get get a pretty full understanding in only a couple of minutes of explanation. It remains simple whilst providing the illusion of something satisfyingly in-depth for those who may be less experienced with the boardgaming world.

The objective of Munchkin is to get to level 10. That it. It’s really straightforward. And there’s a simple route for getting to level 10 (kill monsters and sell your excess gear). For a game hoping to attain mass appeal, a clear objective a really great thing to have. And an objective like, get the most VP (victory points) is usually not a clear objective. This is particularly true if there are many ways to score VP, or if the process of scoring a VP requires a lot of steps. I’m not saying that scoring VP is a bad objective, but rather that it’s usually not a clear objective. Look at the biggest boardgames on the market and consider their simple objectives.


You get the idea.

Expansions seem to be the bread and butter of the boardgame industry and Munchkin is a clear example why. There seem to be endless rethemes and expansions to Munchkin, ranging from a few cards to hundreds of cards with rule variations to board game variants and even dice bags and level tracking tools. The rethemes seem to go all over the place and cater for a diverse range of interests – zombies, superheroes, Conan, spies, vampires, Adventure Time and even weird stuff like Axe Cop. Many of these expansions and rethemes can be combined to make massive and increasingly complex games of Munchkin for players who want new jokes and weirdness. I think that’s a pretty cool idea and I have nothing against games that market themselves as clearly expandable, as long as the original product is perfectly playable in its own right (Smash Up and Netrunner are clear examples of this and both are games that have suckered me into buying every expansion!).

The simple rules, objectives and humour on the cards all lead to one clear point: players have fun! This was clearly the ultimate ambition of the game - not balance or replayability or anything like that. Just fun. This is a game that encourages all kinds of backstabbing and silly humour. And that's great! Now, the fun might not be the same after 10 plays, but it still can create a great impression on its early play-throughs, and that's enough to develop great word-of-mouth promotion. And word-of-mouth promotion is one of the best kinds of promotion you can get. 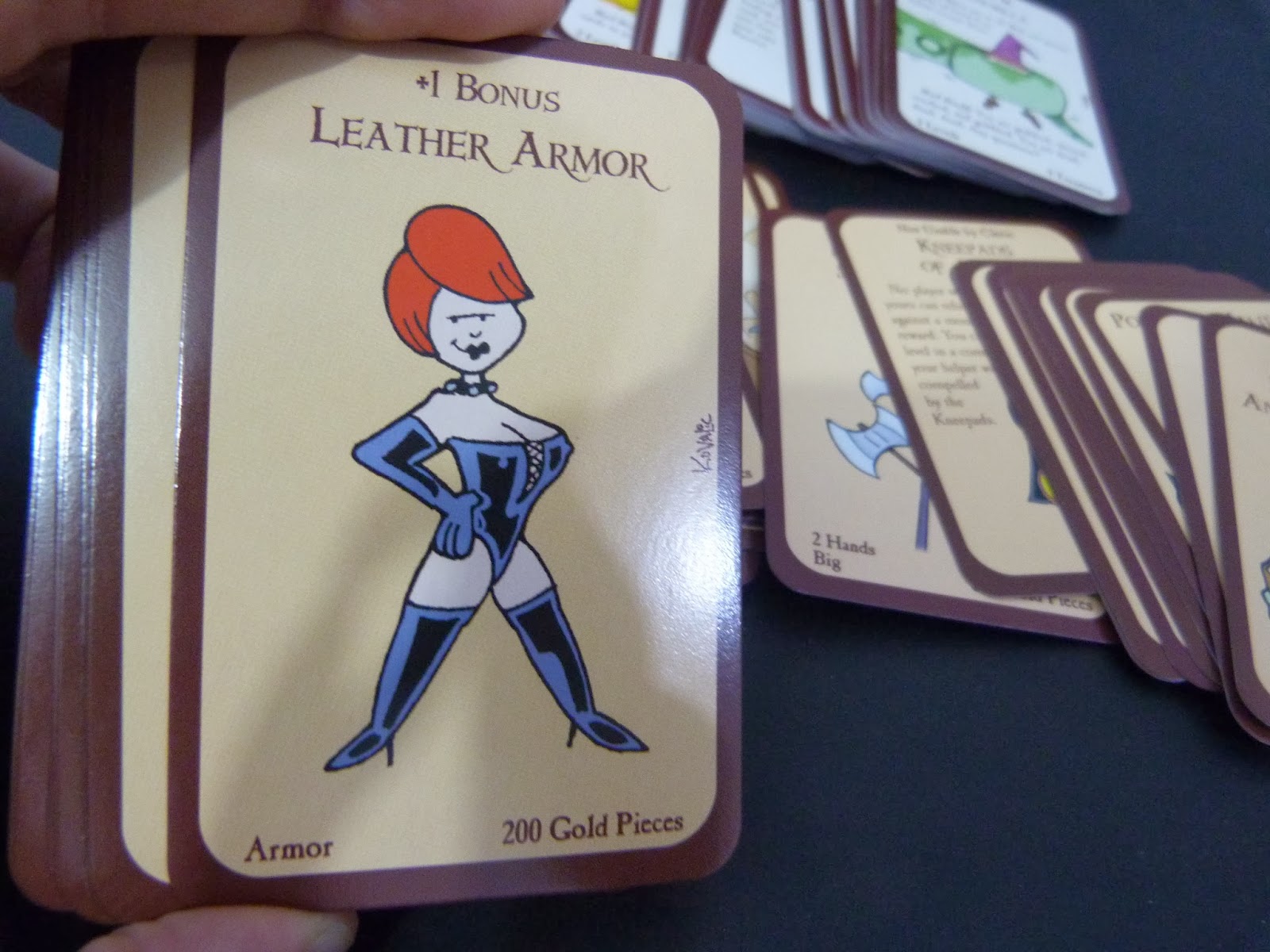 So in summary. I don’t think Munchkin is a very good game, but I can appreciate it for what it does and am happy to see it drawing new people into the boardgaming hobby. If you’re new to boardgaming, and you’re friends are too, then it’s a nice jumping in point (though there are better entry-level games which I cover in this article). If someone wants to play Munchkin, I don’t hold enough revulsion to refuse and can still have a good time. It’s just that, well, we can do better.