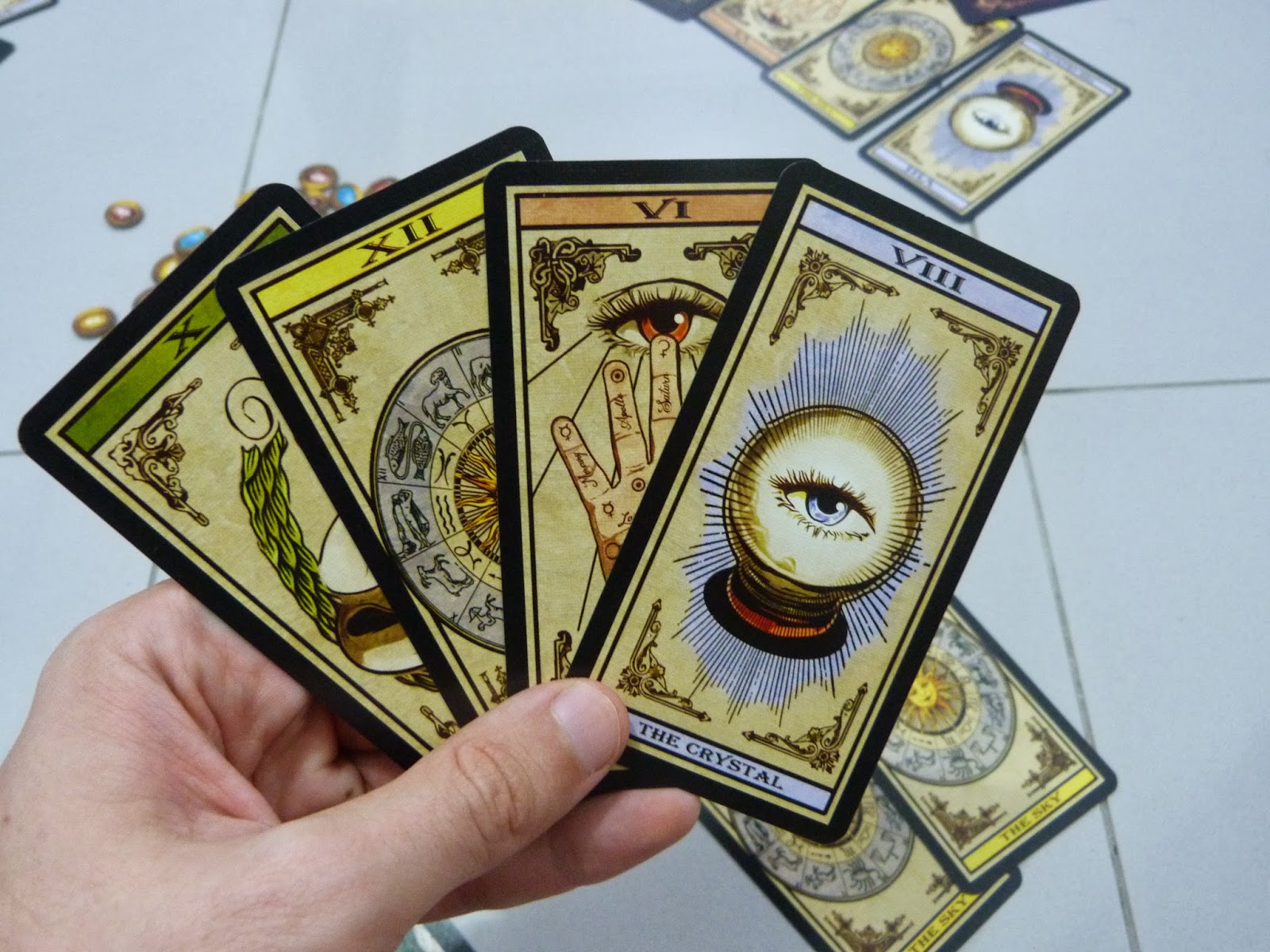 The overwhelming atmosphere of Divinare is total silence. Much like poker, Divinare proceeds with players trying to deduce the state of the game, reading signals from their opponents and trying to bluff their way to victory. And though it's pervaded by silent thought, Divinare is a divine game of deception, deduction and drama, where players try to prove themselves the best at predicting the future and become the Master Divinare. 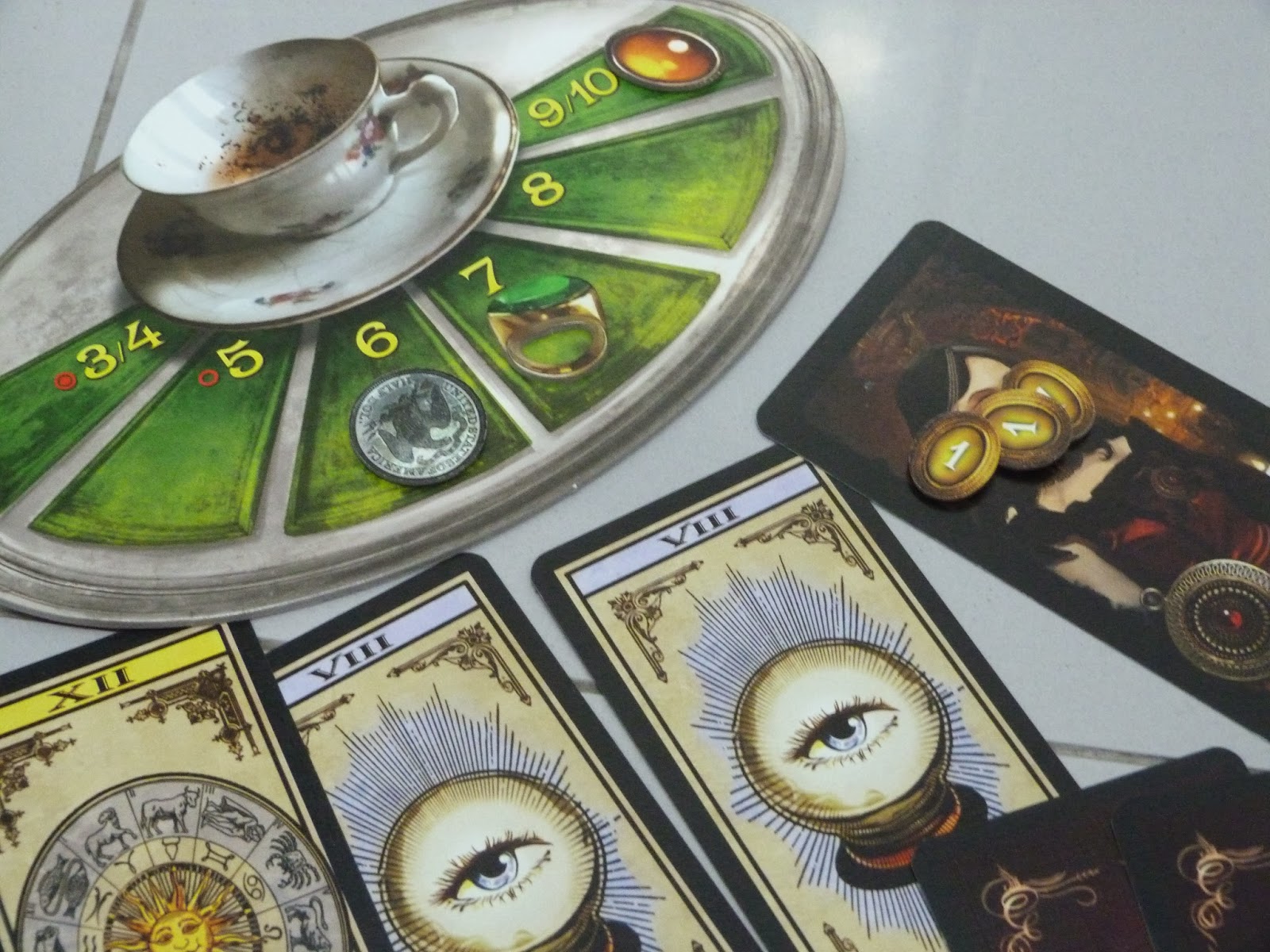 So Divinare is a remarkably straightforward game which allows for a large amount of divergent complexity. By this I mean, the rules are simple, but the strategies are anything but that. Let me explain:

A deck of cards contains four different types of cards – tea leaf cards, palmistry cards, crystal ball cards and astrology cards. A number of cards are removed from the shuffled deck and these removed cards are not revealed to any of the players. Then the remaining cards are dealt out to the players. It is each player’s task to deduce how many of each card type are in total held by all the players combined (the initial random removal of cards at the start means that this number is randomised). To make your prediction, you place one of the four card types face-up on the table and then place one of your distinct tokens on that card type’s prediction board, on the number you think is appropriate. As the game goes on, predictions become more and more accurate because you will see more cards face-up on the table and because every few turns players will draft the cards remaining in their hands -- meaning that players have to pick half of the cards in their hand to pass to the player on their right. Several more turns in and you may have seen 20 cards in total, and you will be trying to keep track of which cards you’ve already drafted along with the cards in your hand and on the table. And this is not as easy as it sounds! 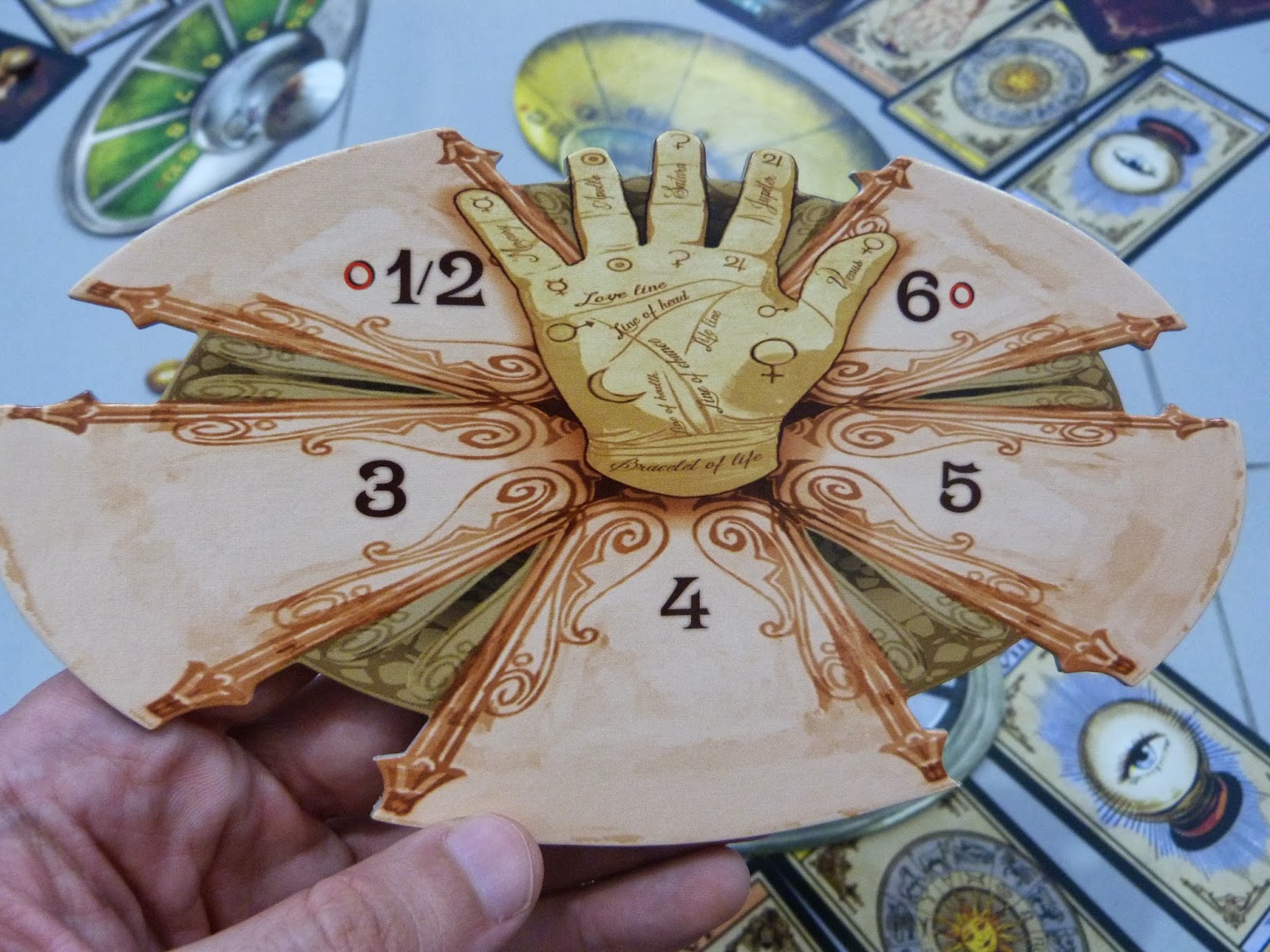 So in the early game, you might think there will be six crystal ball cards, but you have two in your hand – you decide to place your token on the space indicating that there are ten crystal balls, to attempt to convince other players that you’re holding a larger bunch of them, but knowing full well that later on you’ll adjust your token when you play your second crystal ball later in the game. But then you get drafted a third crystal ball and realise your initial bet was probably closer, but now have to play these cards and move your token at least twice, in which time other players see through your deception and nab your space. Unless you draft them later and instead change the predictions you may have made for other cards. Or something like that. 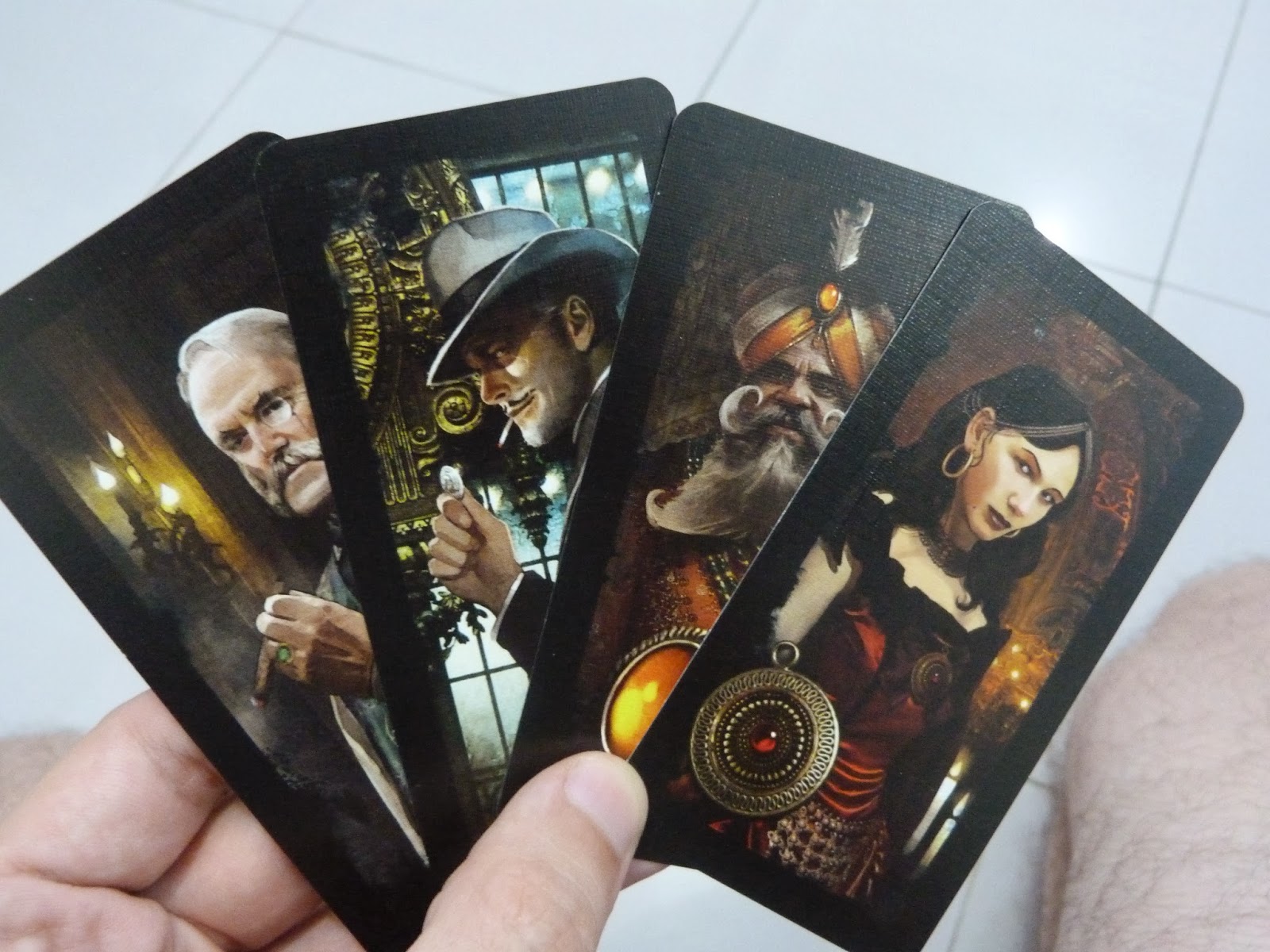 In Divinare you will spend a long time trying to analyse your opponents’ motives and trying to deceive others. You only get six turns in a round, so you can’t backtrack too often and a crazy bet could be totally transparent. How easy to manipulate are your foes? Maybe if you act like your unsure on this move, they won’t block the number that you really want later on, or you can get them to move off the number that you really want. When it comes to drafting, are you going to be totally giving your game away by giving the next player two palmistry cards when you’ve already made such bold (and false!) claims on that prediction board. There really is a fantastic degree of mind games in place!

All things considered, I quickly became a big fan of Divinare after only a couple of games. Straight away, I was very impressed with the quality of the components in the box – nice thick tokens and game boards, well designed cards, plenty of score tokens and even plastic baggies to store everything in once you had punched the tokens out. I also love how the game’s theme links so well with its main mechanics (you are literally trying to divine the cards), much more so than any other game that I can readily think of. I've found that the game plays well with both four players and two players and it was quickly becoming one of my favourite games up until I tried introducing it to a bunch of non-gamers. We’d been playing Love Letter (review) to tremendous effect when I pulled out Divinare. It fell on its face so hard, I could hardly believe it. Clearly the level of concentration required made this game totally inappropriate for very relaxed, party game situations. In the right context though, Divinare is truly a fantastic game.

Forget about it. No colour issues at all!