Otontin: Warriors of the Lost Empire is the latest offering from Singaporean publisher, Red Tin Bot Games, which promises an intriguing mix of of push your luck mechanics, diplomacy and ancient Aztec warfare for up to eight players. This week I got to try out Otontin and see for myself if it lives up to its broad ambitions. 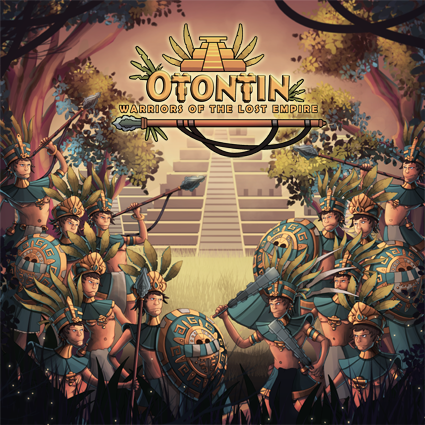 Otontin puts players in the role of city leaders from a bunch of rival Aztec cities. Each of the players is trying to collect cocoa beans through harvesting, diplomacy and attacking their neighbors. The first player to gather ten cocoa beans is declared the winner.

In order to incorporate so many ideas, Otontin breaks itself into a two smaller mini-games - a dice-rolling push-your-luck game and a diplomacy and warfare game.

The dice game is pretty simple - you roll three dice at a time and stop before you roll four skull dice, collecting whatever resources came up on your dice. So you can roll warriors, which you use in the next part of the game to attack other players and defend your city. You can roll cocoa beans, which you can collect to bring yourself closer to the game's victory conditions. You can roll priests, which are simply rerolled later. And you can roll skulls. Skulls let your neighboring players steal warriors from you and, if you roll too many, force you to lose the rest of your turn - including the diplomacy and warfare phases.

The diplomacy and warfare phases allow you to steal cocoa beans from your neighbor. First of all, you spend some time striking up deals with players to your left and right. "Let's call a truce," or, "Lets gang up on Joe," or, "I'll pay you a cocoa bean to help with my attack on Phil," or, "I'll give you a cocoa bean if you let me pass through your city to attack Julie." Things like that. Then you place cards to your left and right, indicating what actions you will take towards those two players - all players reveal these action cards at the same time. And finally, in the warfare phase, these action cards are carried out. If you played an attack card against a neighbor, then you can move your attack troops to that neighbor's city, do a quick check against that city's defense values and steal cocoa beans. If you played a defense card, you get a defense bonus against that player. And if you play a hand card, you can carry out those various diplomatic alliances you arranged with that player.

And that's it. Roll dice. Get troops and cocoa. Compose your battle plans. Attack your neighbors and get ten cocoa beans to win.

Despite the fairly simple premise and the the promise of plenty of player interaction, things kinda go downhill from here with Otontin.

So What's the Deal?

Fundamentally, the link between the two halves of the game seems to be broken. Half the game is a long winded dice roller and half the game is fairly ineffective and dry negotiations.

For starters, dice rolls resulting in resources are needed to win - you can't win through diplomacy alone. You need troops and you need cocoa so a lot rides on those lucky dice rolls. If you roll four skulls and get locked out of a round, well then you're screwed, but the alternative is backing out too early, not having enough troops to defend yourself and getting screwed in a different way. So players often develop an all-or-nothing mentality. This is further encouraged by the overpowered effect of the skulls - every time you roll one you can lose two troops to your neighbors - so most players find they're forced to keep going as they see themselves getting weaker and weaker and their neighbors getting more and more powerful.

Then the diplomacy and warfare is oddly complex and ineffective. The system does allow for backstabbing in a limited fashion but there's little incentive to gang up on other players because you're likely to help another player win by too large a margin and fighting is so expensive in the first place. Furthermore, you'd have to be nuts to offer any other kind of strategic alliance because it would be so easy and devastating to be betrayed if you don't put your defenses up. At any one time you're only able to defend in one direction, so your options are pretty much laid bare - attack one player and defend against the other. Maybe throw in a truce if you and a neighbor are mutually screwed up.

In fact, the best strategies are usually so obvious, that almost all of the players at the table (in both gaming groups that I tried this with) took the same basic strategy: keep rolling until you have three skulls in the dice-rolling phase, then attack players who were unlucky enough to get a fourth skull, keeping a couple of warriors on your defense card to make sure that any attack on you simply isn't worth it to your opponents. Because the victory conditions are first-past-the-post (like Munchkin), whenever players begin to gather too many resources, then other players will gang up on that individual. The winner is generally the player who manages to acquire a bunch of resources and is lucky enough to have a neighbor roll the four skulls and block attacks from that side (opposing armies can't move through a city where that player has rolled four skulls).

With seven players, I found Otontin to take about forty minutes, which is fine, but much of that time is spent twiddling your thumbs and waiting to do something. During the dice-rolling phase, you have to wait for all players to take their turns with the dice, paying attention when it's your immediate neighbors' turn, in case they roll a skull. And if you roll four skulls, you'll continue to twiddle your thumbs throughout the next phase of the game too, as you are locked out of the diplomacy and warfare and your opponents make mince-meat of your temporarily weakened armies and steal all of your cocoa beans (man, like I said, the skulls are lame and overpowered). It's not ideal to have twenty minutes of down-time in a forty minute game.

The last thing I want to mention about Otontin is the rule-book. Oh god, the rule-book is horrible. It's unwieldy, needlessly complex and badly organised. After going through it twice, I still wasn't entirely sure how the skulls worked, for instance, or the diplomacy aspect. The diplomacy is actually really straightforward once you get a little practice, but the rule-book managed to turn into a horribly difficult concept. With the skulls, rather than group together all the relevant information regarding what happens when you roll one, the relevant information seems to be scattered throughout the booklet. I've no idea what the writers were thinking when they did that and it makes me wonder if this game was blind-playtested at all, because this is an issue that should have risen pretty quickly and should have been addressed before printing.

I really hate to be so cruel about a game - firstly because I strive to be balanced in my reviews, looking at both the good and bad aspects of a game, and secondly because I want to do a local publisher a solid and help them get some sales - but honestly, Otontin is just not fun to play.

Colour choice is terrible but only has an effect during the dice-roll phase. There are green and red dice which are difficult to tell apart. Player colours are also poorly indicated, using a coloured border on the player cards, but again, it won't make any difference in the game itself.

Full disclaimer: Red Bot Games provided me with a promotional copy of Otontin. Obviously, that didn't stop me from saying mean things about it.
Email ThisBlogThis!Share to TwitterShare to FacebookShare to Pinterest
Labels: Colourblind Problematic, Dice based, Push Your Luck
Newer Post Older Post Home
RobinDavid: Where I talk about boardgames and boardgame design.