Which came first, the ball-point-pen or the polio vaccine? The saxophone or the telescope? Timeline: Inventions is a trivia game about the dates of inventions and discoveries and it's been selling like crazy - flying off shelves around the world. Personally, I'm something of a history buff, so when a buddy managed to grab a copy of these tiny cards in their tiny tin, I was excited to give it a crack.

In Timeline, players each get six two-sided cards. On one side of each card, we have the name of a discovery or invention; on the other side, the date this said item was discovered or invented. Players look at the undated side, and guess where to place this card in relation to other dated cards already played on the table in the form of a timeline. The player guesses the cards position and flips the card over, revealing the date of said invention. If they're right, they place their card in the developing timeline. If they're wrong, they put it in the correct place and draw a new card. The winner is the first player to make six correct guesses, and thus, get rid of their cards.

Timeline is a pretty simplistic trivia game at heart. You have to make rough guesses of the date associated with your card, so you can place it in relation to others - you don't place it on a specific date space, but rather, just between two dates. This means that if you don't know the date associated with you card, you can often make a reasonable inference. For instance, when I was trying to play "The Internal Combustion Engine", I was able to figure things out by looking at the location of "The Model T" and "The Motorcycle". Cards range from the way easy ("Atomic Bomb") to the crazy-hard ("Pluto").

Things can get quite tough in the late game when the gaps between items become very narrow, so your guesses must become more accurate. This means, you are likely going to try and get rid of the hard ones early one, when there are still broad regions of time to place them in.

There's a surprising amount of mind-games involved as players try to convince one another that they're wrong or "you must be crazy to put that there!" In my experience, things didn't get competitive though, much as I often find happens when playing trivia.

One thing I do really like about Timeline, is that solo-play is an option, and an option that I don't think is half-bad at all. 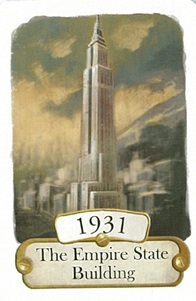 Timeline is printed on a bunch of small cards and contained in a small tin - it's really quite a cute set up. The cards have a linen quality to them, which is a nice touch. The cards are an odd size, so you might find that sleeving them is difficult.

It's possible to divide the deck into different categories, depending on your interests (music, science, etc.) and these are defined by colour, which can be troublesome. During the game itself though, colour is not an issue.

This game is surprisingly fun - even for a more serious boardgame group. If your a history nerd like me, you'll likely go crazy when you see your buddies make stupid mistakes, but that's beside the point.

I do worry about replayability. You go through a lot of cards in a single game and before you know it, you will have seen them all (although, there are expansions available and they're all quite cheap). After such a point, the challenge of Timeline will decrease significantly - but up until that point, I think most players, casual and serious alike, will enjoy themselves and enjoy nerding out!