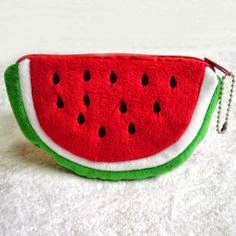 After finding a wallet with a watermelon design in Singapore's Chinatown, I began playing with the idea of producing a small game that would fit in this wallet. (You can read more about this inspiration here)

My immediate idea was the produce a tile based game and I kept on coming back to this joke about poisoned watermelons:


Every night a group of teenagers would come into the farmer's fields and eat an bunch of his watermelons. Determined to scare them off, he erected a sign reading, "Warning: One of these melons has been injected with poison."
A while later, he was inspecting his field, happy to see that no more melons had been stolen, only to see a new sign next to his own, reading, "Now there are two poisoned melons."

So it only made sense that this would be a bluffing game. I begin drafting a two-player bluffing game, where each player would know the location of one poisoned melon in a field made from melon tiles. Players would take it in turns to move melons around and then flip a tile - if the tile showed a healthy melon, that player was fine, and the next player took their move. If the melon was poisoned, that player lost the game.

I knew this was going to be bad, but I made a prototype anyway and was proven correct. It sucked. Still, I left the design in my notebook and came back to it every now and then.

The next iteration of the game took the idea from Hanabi, of being able to see other players cards/tiles, but not your own.

The initial design didn't really make much sense, but involved betting on other players to survive or be poisoned. Then placing your cards/tiles face-down on the table and eating one. The idea was that the betting method would give you a clue as to which melons were safe to eat, but in practice, the best technique was to ignore all the bluffing and just pick a melon card/tile at random. Which isn't really a game. So, again, garbage.

I left the idea alone for six months or so.

Now the game started to come together. While I was travelling through the Malaysian highlands for a week, I had the time to sit and mull over just what makes a bluffing game work and how I could keep it tight and simple.

I built a deck of 48 cards which represented different melons - still small enough to fit in the melon wallet that first inspired me.


Each melon in the deck has a different value and is either poisoned or not poisoned. In a four player game, one player places a melon face down, declares its value (truthfully), if it is poisoned (they may lie), and dares the next player to eat it. That player must either call the first player's bluff and eat the melon (turn it face up and see if they are poisoned), or up the ante to avoid eating it, allowing a third player to decide if they want to now take two melons up the ante again. If the round gets back to the start player, they must eat the pile of melons.

The bluffing mechanic is really nice because you are also playing with calculated risks. If you see three cards, it may just be worth eating them and risk being poisoned. And the different values on the cards, of which the initial player must be truthful, allow for some bluffing and double bluffing.

Your score is the value of the melons that you take, so the game is compact and economical too.

The biggest problem at the moment is that card-counting is very very easy for cautious players. There are only four poisoned melons per round and if you see them all (because multiple poisoned melons were dropped when upping the ante), then you know you can eat every melon remaining without risk.