"Argh, more aliens in orbit! Commander, can we budget for more attack satellites?"

"No way! We can barely afford to keep up our base defences - it doesn't help that our chief scientist over here is buying everything he sees! Get it together, Jim."

"You want this tech or not? Make it work!"

"Deploying interceptors to Asia… aaaand… we're out of money."

"Alien ship detected in Europe. Looks like they're on their own..."

So goes the latest in boardgame hotness, X-Com - a cooperative asymmetric game based on the videogame by the same name and a truly one-of-a-kind boardgame experience. Stressful, frustrating and joyous all at once - let's take a look.


Players each take one of four distinct roles - the communications/satellite defense guy, the money/fighter jet chap, the fellow in charge of assault teams, and the science nerd. Together, we must fight off an invading alien force whilst controlling levels of public panic across the globe. Should too many people freak out at flying saucers in the skies, or should the aliens destroy our base, the aliens win. Should we manage panic levels and beat the final mission, we win. It's far from easy.

My biggest problem with cooperative games (which I generally love despite this problem) is that they are prone to quarterbacking - one player taking charge and ordering other players around. Many games use things like traitor elements to get around this - so in Dead of Winter, for example, you can't be sure if the pushy player actually has your best interests at heart - but X-Com takes a wholly different approach - the app. That's right - X-Com requires you to get out your tablet device and launch an app while you play. Like those VHS games of old, X-Com directs you through game phases, times your actions and controls the enemy through this app - and it's masterful. So there are two phases in each round - a timed phase and a resolution phase. The coomunications guy takes the app during the timed phase and reads out the instructions as a timer counts down:

Each instruction refers to one player, it's tightly timed and there's simply no opportunity for quarterbacking. I've never seen a cooperative game force so much independent decision making.

On one occasion, while I was the commander, I wanted help with a decision. During a heated moment, I asked asked, "Do you think we can handle more panic in Europe?"

And the squad leader replied, "Do you think I know? I've got stuff to think about here!" He was busy trying to figure out which troops he could spare when his "Assign troops to mission" instruction came up. 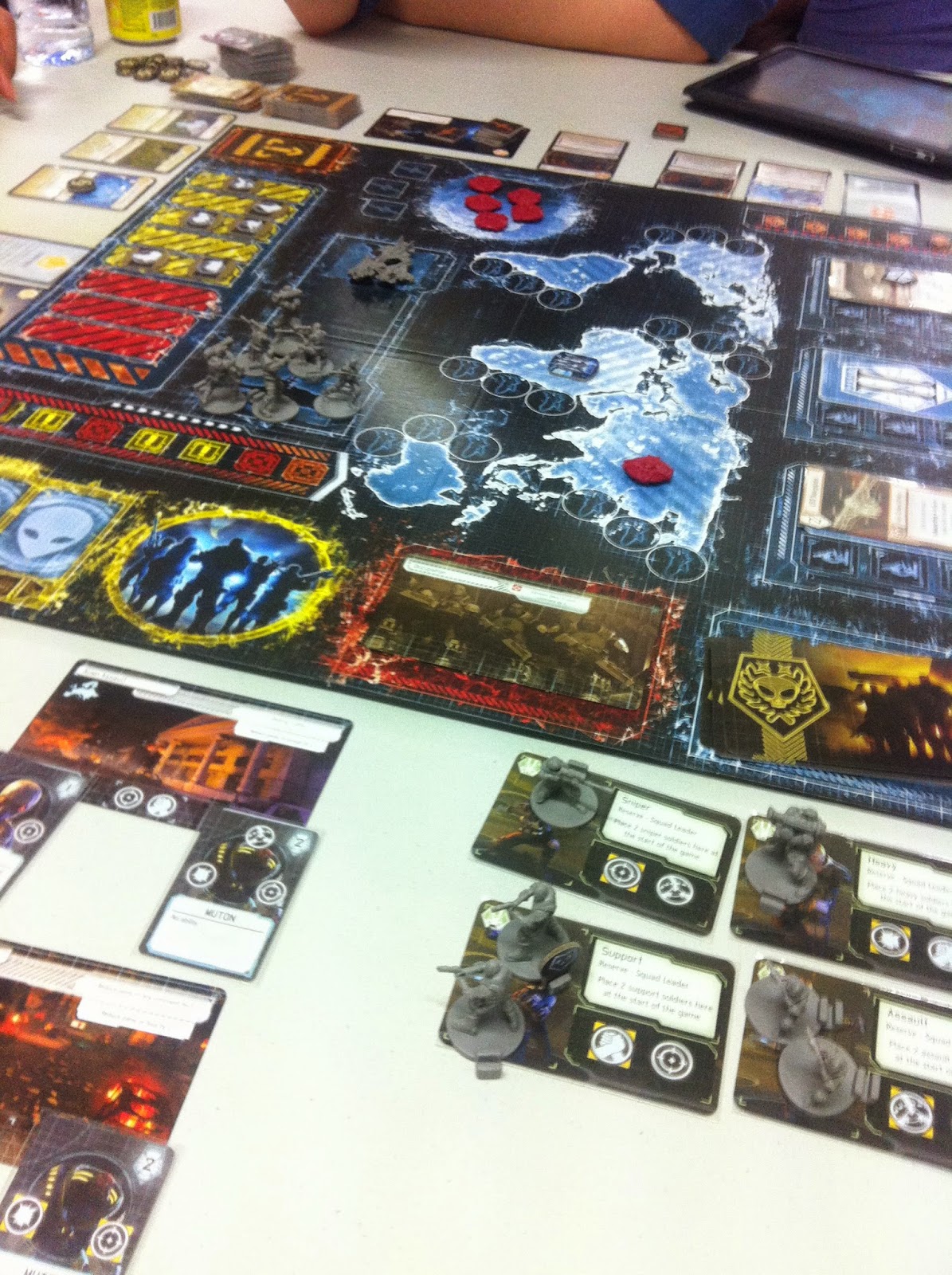 The elements in the timed phase can come in different orders - you might be asked to assign troops to defend HQ before you know what the final alien count in HQ is. Or you'll send fighter jets to Australia only for a huge outbreak to happen on Africa. And the time is just ticking away. Talk about stressful!

After we make all of our key decisions in the panicky timed phase, we get to the resolution phase where we get to breathe for a bit, roll dice, and see how things panned out. Then we drop some info about the game state into the app and it all happens again. It's tons of fun.

But. This is undoubtedly a fantastic game and is really pushing boardgaming forward. It's a great time for a long time and is uniquely able to create an atmosphere of teamwork, a heightened level of intensity, and make everybody feel valuable. I honestly think everybody should give it a play. Four, five, or six times. But I have a big worry. I don't know how much fun X-Com will be after those six times and once you beat (or get sick of) it's higher difficulty levels. Games of X-Com can be quite similar. It is largely luck based (but not too much) and players aren't able to significantly alter strategies from game to game. Unless some wicked cool expansion comes out for it, you may find yourself growing tired and trading the game off surprisingly early.

But yeah, replayability concerns aside, this is a solid game which creates a lot of really unique, fun times. I rarely say this, but I sincerely think you've got to try this game out - just to experience it. Perhaps you can consider splitting the cost between three other friends, or something, so it hurts less when you all tire of it.

None at all. Go ahead and kill aliens.