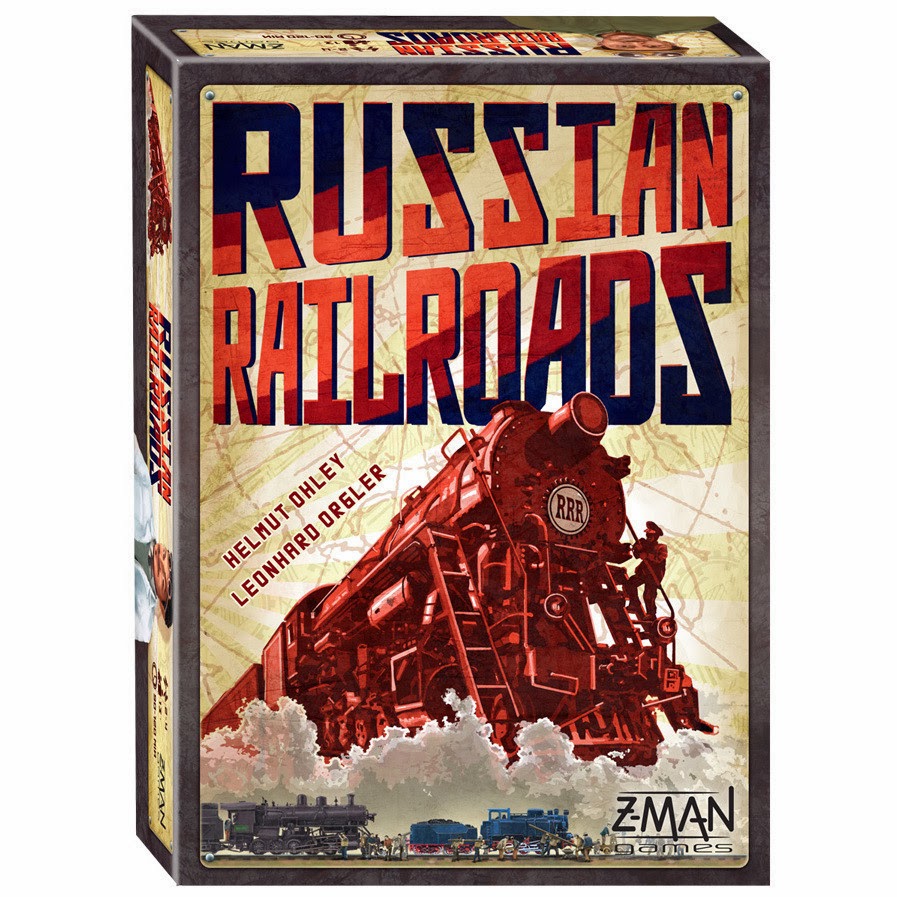 Sometimes I'm such a judgmental asshole. When a friend running a recent meet-up arrived with only a choice of two games, La Havre and Russian Railroads, my heart sank. La Havre, in my opinion, is so incredibly dull, I'd rather just play tiddlywinks with the tiles. Russian Railroads just looks like another train-themed Eurogame. Lay some tracks and deliver some goods or some other crap. My interest-o-meter sat at a steady zero.

"Well, the lesser of two evils," I told myself and sat down to give Russian Railroads a try.

Damn though. I was kinda wrong. It's kinda really quite good!

So Russian Railroads took about fifteen minutes to explain and the first round was pretty slow as players figured out the intricacies of the rules, but then it kicked into gear and was away nicely. What we have here is a worker placement game, meaning that players take it in turn to choose from a set of actions in the board, which in this case are used in an effort to develop each player's own railroad system. The more you achieve in your railroad empire, the more victory points you'll attain, and that will decide the winner after a fairly quick six rounds.

I make it sound simple here, but it was actually a lot to take on for a new player. There are three railroad tracks in each player's system, with different kinds of rails, factories, trains, engineers, bonus tiles, bonus cards and a decent variety of available shared actions and all their various interactions. But in the end, the game system wound up becoming really smooth - there was often a lot going on in an individual round, but it all became quite intuitive and easy to track, partly because your aims are pretty straightforward (build effective tracks, better trains and make research advances) and partly because there are only a couple of resources: five workers each and a few gold coins. I despise juggling resources - pushing little coloured bits around like in Milestones or Agricola is exceedingly tedious, in my opinion (a situation exacerbated by my colourblindness - I've made so many mistakes in these coloured-cube games). Because we only have a couple of resources in Russian Railroads, players can focus more on strategic play, rather than the mathematical perfection of their cube juggling.

Even though I found Russian Railroads to be plenty of fun and satisfying to play, it's not without it's flaws. Primarily, like many other worker placement games (Agricola and Glass Road come to mind) games of Russian Railroads can sometimes feel like multi-player solitaire, with each player focusing on their individual board and so there is minimal player interaction. In theory, players can block one anothers' plans by claiming a desired shared action early in a round, but in practice, this is kind of rare. There are loads of shared actions available on the Russian Railroads board and if someone takes the job you want, you can often claim a similar one by spending an extra worker. Also, players have a choice to develop both technology and their railroads - both of which will grant victory points. On a given turn, if you're blocked from developing one of these things, then, well, you simply develop the other one.

Secondly, depending on what kind of strategy you've decided to take, there almost always seems to be a clearly optimal move. For myself, in an early game I decided to increase my number of meeples as soon as possible. So I advanced my railroad enough to gain a worker, then in every round, jumped in the slot to gain two bonus workers, and finally acquired the permanent bonus worker card. And then I just killed the game - pushing my railroad construction, almost entirely neglecting research. And so I finished within 10 points of the winner - who'd played the game many times before. This isn't a story of how great I am (nothing could be further from the truth!) but instead how clear some of the optimal strategies are. Or maybe it's something else - maybe the game is just very good at making you feel clever.

Despite the almost inability to block other players, the solitaire aspect and the often self-directed strategy, Russian Railroads is still loads of fun to play. Maybe it's the way the final rounds involve massive scoring opportunities - allowing you to vastly manipulate your resource machine and feel like a total badass. The game is perhaps so overbalanced that it makes you feel like a great player - you can't really fail, to be honest.

Russian Railroads may not reach the great heights of other worker placement games like Copycat and the excellent Tzolk'in, but it's still a ton of fun and beats out the likes of Milestones. Unless you have a penchant for worker placement Eurogames, you should probably skip buying it, but when somebody pulls it out at a game night, may I suggest that you get on board with the game - because you'll be in for a good ride.

I had trouble identifying the various worker tokens when they were on the board, but this had no effect on gameplay. I wouldn't worry about it. The different types of railroad are also indicated by colour, but they are pretty easy to figure out and it doesn't mess with the gameplay.

Games Mentioned in this Review