Tontine was featured on Kickstarter earlier last year, and is now available on The Game Crafter. A budget entry which tries to emulate the ruthless, dishonest card play you would imagine in the old west. Lets see how it plays out! 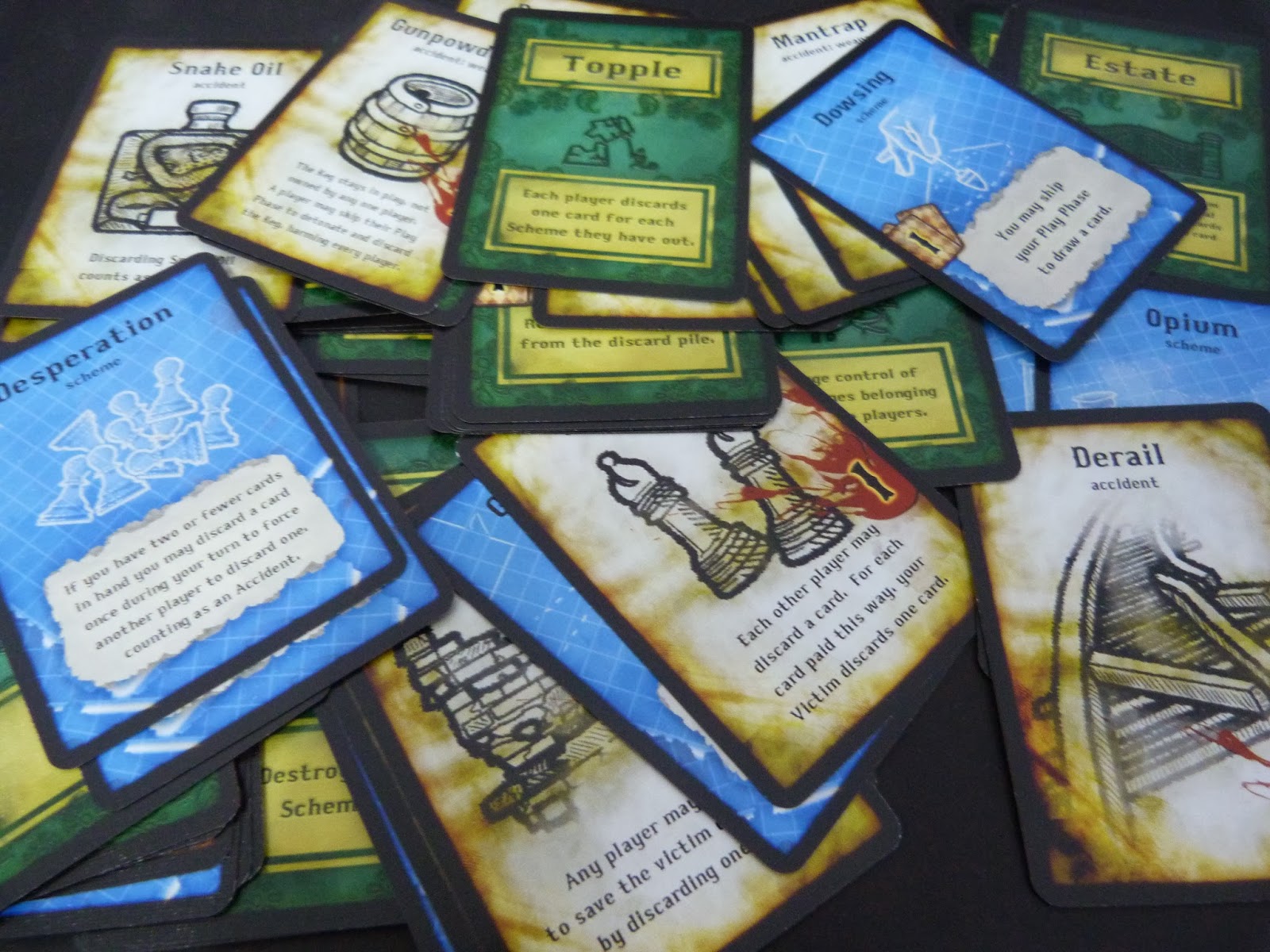 Tontine is a very simple, "take a card, play a card" game, where players try to eliminate each other by playing attack cards and reducing their opponents health to zero. Cards usually take the form of weapons, which attack other players for a set amount, or other cards which force players to draw cards, trade cards, show their hand and so on. Player health is represented by the amount of cards each player has in their hand – so as players get weaker, they also have fewer cards to call on in their turn. 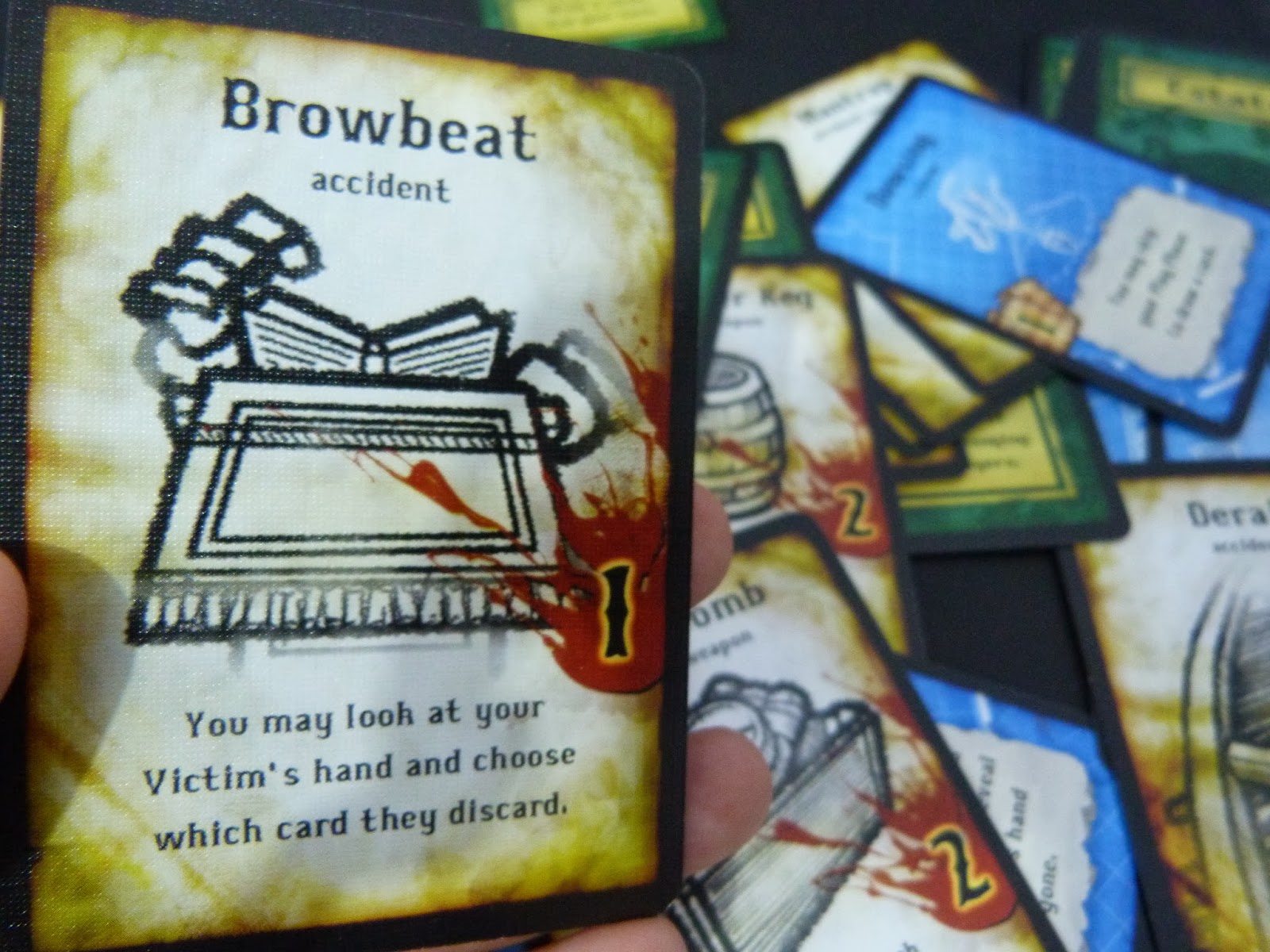 Gameplay is generally quite quick, and there is player elimination, but it’s not a big deal as rounds are usually resolved within ten minutes or so. 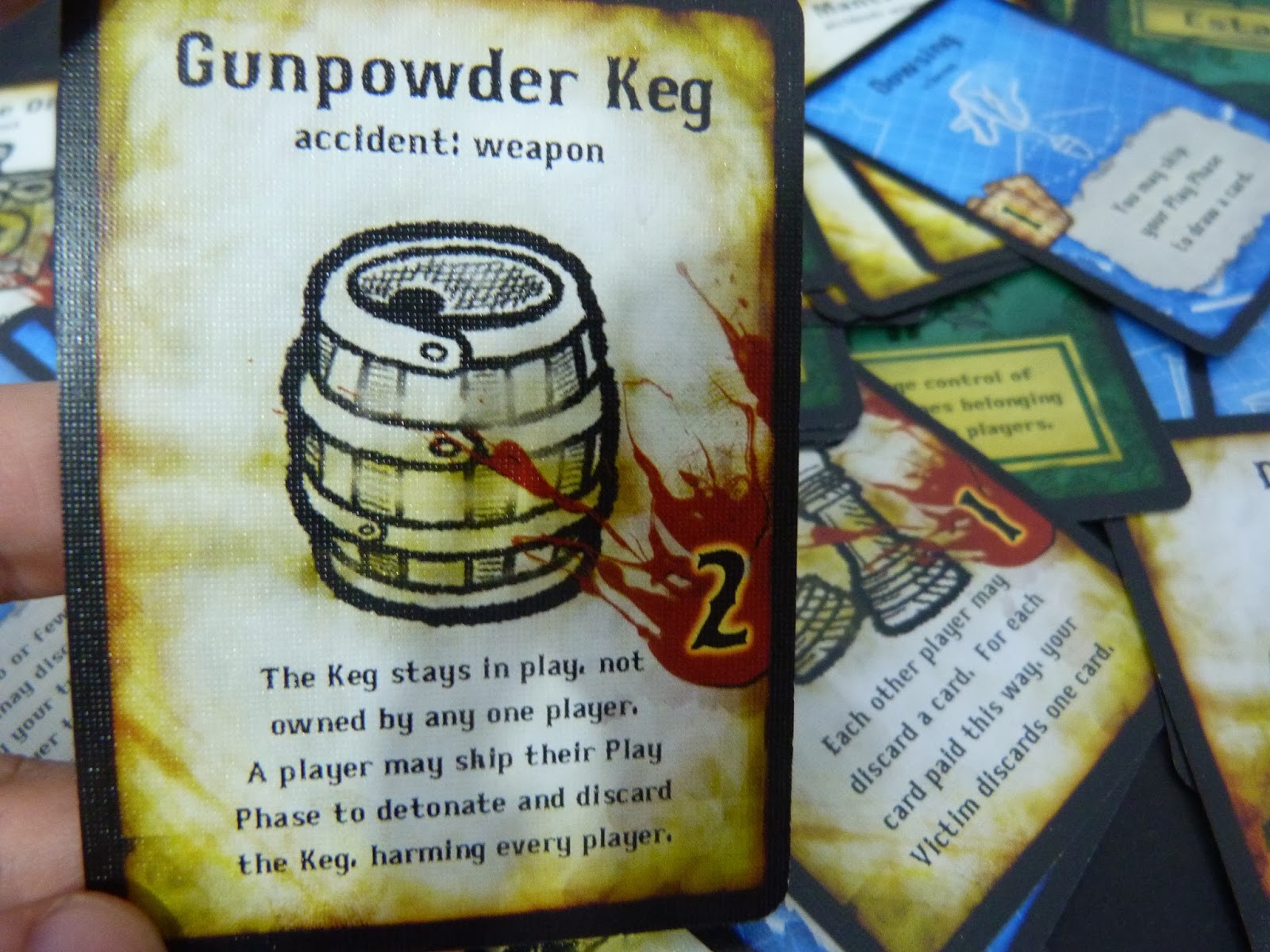 Now, the designer of Tontine has stated that he was trying to design a card game which would feel like the players were cheating. In order to do this, the designer has made it so that every card in the deck is unique. As far as achieving the ambition of making the gameplay feel cheaty the designer has done a great job. It is really cool to have so much variety going on. All the way through, players are throwing up cards which you have no way of expecting – it feels totally like cheating when a player drops a card which damages you by two, or makes you unable to draw a card on your next turn. The problem is, an entire game which feels like cheating isn't very fun. Cheating isn't very fun. It means that you don’t deserve your victory, so I don’t know why you would want to design a game around this mechanic. Cheating isn't fun, watching other players cheat isn't fun, and being cheated isn't fun... usually. 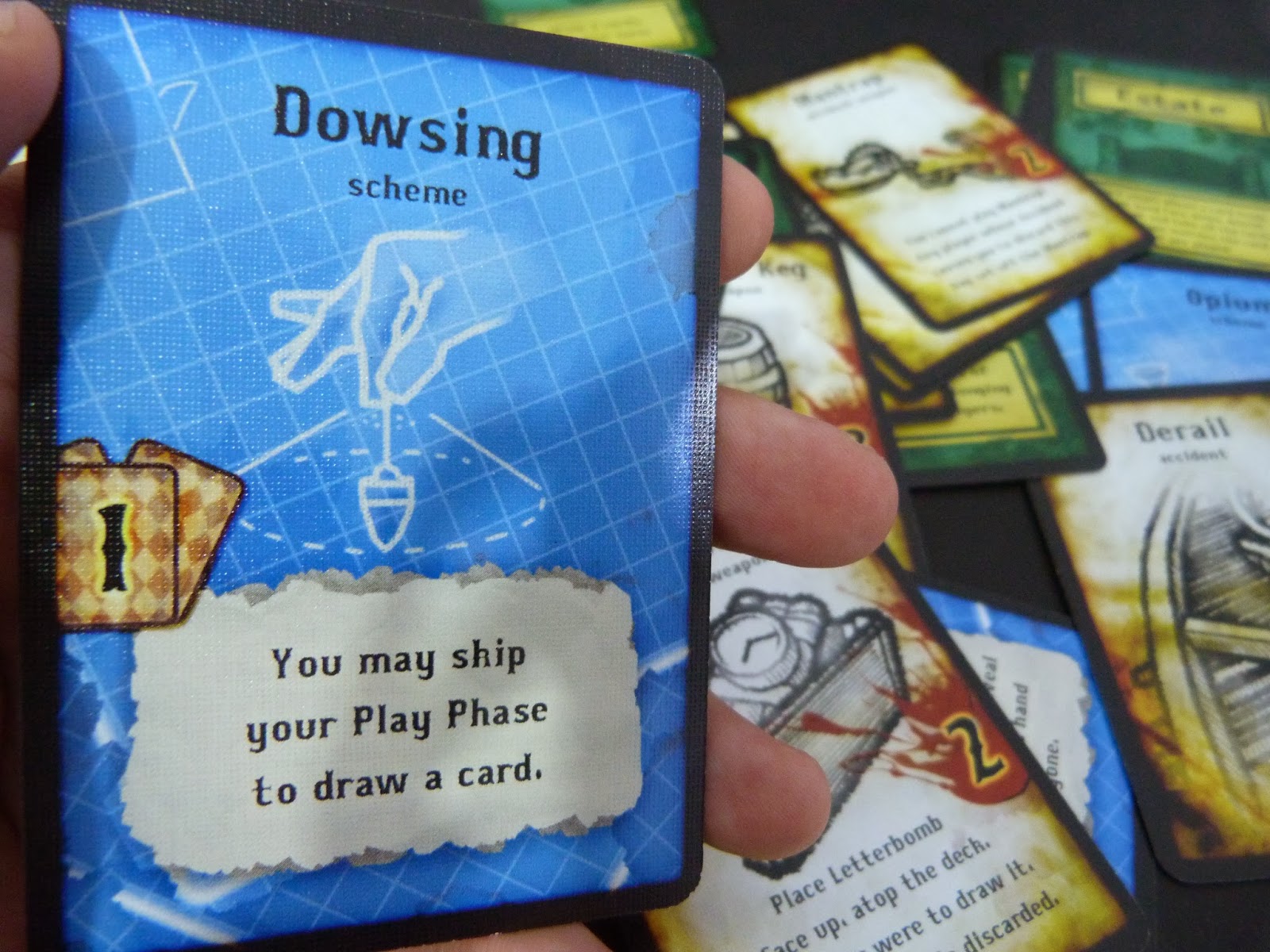 Having every card be a unique card also throws up another issue. What is meant to be a quick-playing game where we attack and reverse and backstab actually ends up being quite a long winded rules interpretation game. After each player plays their card, everybody has to stop and ask, "ok what does that card do" – read through, figure out, repeat. Normally, I love a game which has straightforward rules and then complexity added by way of cards twisting those rules, but it doesn't really work as well for this kind of fast-paced game. 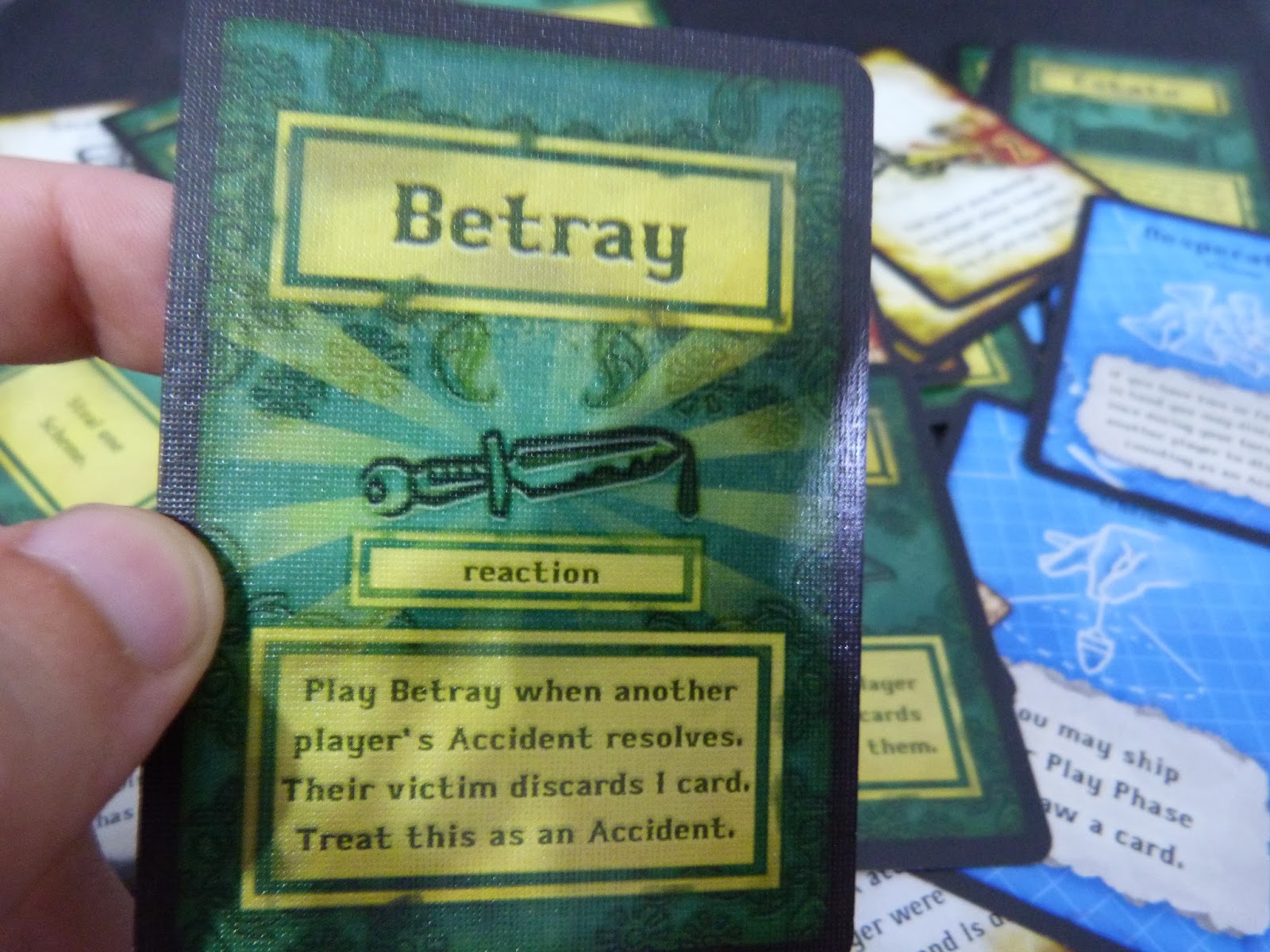 One thing I can say for Tontine is that it really is aesthetically pleasing. The attack cards are all gruesome illustrations, which kind of remind me of the style of Sweeny Todd, which is something I could really get behind. It certainly looked great when we got it out on the table. And considering the diversity of cards, there really are some very cool cards -- particularly some of the cards which stay in play beyond a single player turn.

You can buy Tontine
at The Game Crafter.
Email ThisBlogThis!Share to TwitterShare to FacebookShare to Pinterest
Labels: Cards Only, Colourblind Approval, Hand Management
Newer Post Older Post Home
RobinDavid: Where I talk about boardgames and boardgame design.