Carcassonne appeals to those who, as kids, would aimless doodle mazes and maps. Which is me. I used to spend hours planning layouts for the Lazer Tag arena I intended to build when I became an adult ("What happened?!" younger me, scolds), dungeon mazes filled with Minotaurs and excessively complex mansions, which I would live in once I raked in all that sweet, sweet Lazer Tag cash. Each of these mansions had huge extensions containing, or were intricately built around, enormous spaces that formed "The Kingdom Hall of Jehovah's Witnesses". I was a weird kid, it seems!

In Carcassonne, you are an old-timey, French land-developer, doing the same kind of top-down layout work as those doodles, but now with tiny representations of the French country. Well, I didn't dream of that as a kid, but the effect is still the same. Over the course of a game, players lay out land tiles to construct detailed maps of the French countryside. Points are awarded for completing features (cities, roads, churches) and farming land. By the end of the game, everyone can sit back and enjoy their collaborative creation -- which always looks pretty much the same, it seems, but it's still a cool feeling.

So, we begin Carcassonne with a shared load of land tiles, all stacked face-down. A selection of tiles are taken to build the starting feature. In the base game, this may be one tile, which has elements of road, town and countryside, or a bunch of tiles which together form a long, aesthetically pleasing river. Players then take it in turns to draw tiles and place them in a valid place on the board. The edges of each square tile are either city, road or countryside, and they must match up with the same features of other tiles which have already been played.

Once you place your tile, you can place one of your seven tokens -- the infamous meeple, which pervades boardgame culture -- and that piece will become a guard (if he's in a city), a thief (if he's on a road), a farmer (if he's places in open countryside) or a priest (if he's placed on a church). Your meeple will stay in this role until that particular feature is completed and scored, whereupon it will return to the players hand. This is a problem for the player, because if you run out of meeples, you cannot continue to score features. You need to balance high point features with quick returns to achieve victory.

So you place a tile, place a meeple, hopefully score some points, and then it's the next players turn. The game finishes when all the tiles are used up and the winner is the player with the most points.

So the rules are very simple. The only real complexity comes from the scoring of features and this might cause a little confusion and general referencing of rulebooks. Each of the features have their own unique peculiarities which require some unique strategies. Roads score one point for each tile of their length - they usually max out at around seven or eight points, which is not a lot, but roads are easy to complete. The church always scores nine points but can be a huge pain-in-the-ass. It is only scored when the eight spaces around it have been filled in with tiles, which can take ages, and all that while, you are one meeple short. Cities score two points per tile, which can quickly add up, but need to be completely enclosed by city walls, which can be tough, if you're unlucky, and other players can quickly sabotage your plans by making your city too big to enclose effectively  Farms are the real money-maker though. When place a meeple on a farm, he (or she!) stays there for the rest of the game, which can backfire, but you will score three points for every city your farm touches (because it supplies the city with food) -- so the score for a farm can reach up into the thirties and forties, if you play well.

Player interaction comes in two forms: Placing tiles to prevent your opponents from finishing features and fighting for control of unfinished features. Farms, roads and cities are all up for competition. If you lay a city tile, for instance, which doesn't join on to an already controlled city, you can place a meeple there. If you then manage to join this city part to another city with a rival meeple, control of that city will go to the player who has placed the most meeples there. If there's a draw, you both score. This isn't really a big deal for roads and cities, which come and go so quick, usually, but it can have huge consequences when you score farms at the end of the game. Farms can get so big and complex that it's very difficult to keep track of where they meander, which means that players can sneak their meeples in from the most unexpected of routes.

How It Plays Out

I prefer Carcassonne as a two-player game, though it supports up to five. With two players, you have more control over how the board develops and it's easier to realise strategies or ruin strategies.

The game passes at a relaxed pace, but things can get quite complex and highly strung towards the end. You'll no doubt drop a few "motherfuckers!" when the other player manages to sneak an additional meeple into what you thought was safely your farm.

There is a significant element of chance in Carcassonne, when it comes to tile draws. I don't mind this personally -- it means that you have to alter your plans on the fly and adapt as necessary. There is a possible variation where you have three face-up tiles to choose from each turn, which eliminates this factor, but I don't see the small element of randomness to be much of an issue in the first place.

The game is well presented, if somewhat dry in theme. The tiles are thick, tough card with relatively designs on them - though these designs do lack some variety. The score tracker is functional, but does not go high enough for a two player game. Good players will make a lap of the score tracker at least once and as long as you figure a way of acknowledging that, you'll be fine.

So Carcassonne is not the most exciting game in the world, but it is very satisfying to play. It feels great to undermine another player's plans and finally complete that huge city you were working on for twenty points. It's not the kind of game where you are on a knife edge of tension or the kind of game you desperately want to pull out at a gaming session, but it's good bread-and-butter stuff: a staple of the boardgaming world. I wouldn't really recommend it as a gateway game, as so many others are likely to do, only because the theme is so dry -- you're liable to turn off as many potential gamers as you are to excite.

Check out Carcassonne on Amazon.com 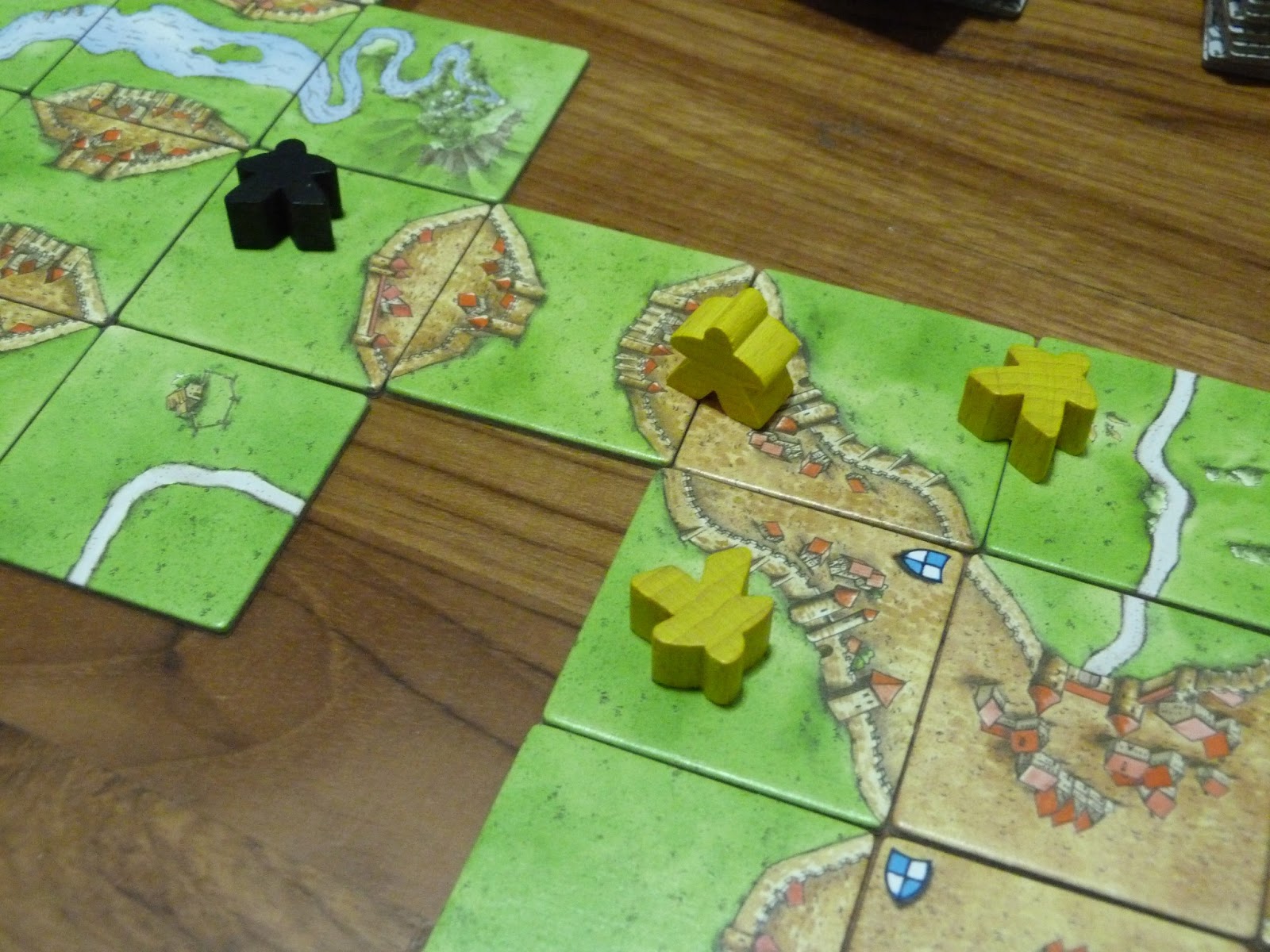 It's not great news, I'm afraid. The game involves placing red and green meeples on a green background, which makes this pretty tough if those are your problem colours. If you are playing a two-player game, you can use the other colours, like black, blue and yellow, which makes things easier. At some point I may get round to painting designs on the meeples, so that they are distinct. Actually, that gives me an idea: Zombie meeples!