We're all coppers in the most corrupt police station you've ever seen. The crooked cops and honest cops hate each other with a passion and are going to settle their differences the good old fashioned way - with guns and violence!

Good Cop, Bad Cop is a small hidden identities game, which encourages us to mislead, backstab, plot and scheme our way to victory. 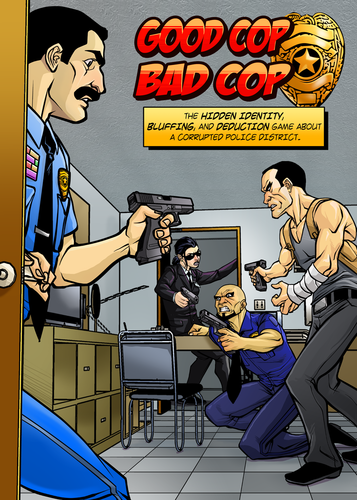 Players are secretly broken into two teams - crooked cops and honest cops - and each team has a leader, who the opposing team is striving to identify and kill.

Take a gun and shoot the enemy leader twice and your team wins. Get shot, and you lose. It's very simple stuff.

But like most hidden identity games, there is so much more going on than first appears.

Trying to deduce the roles of other players and keeping your own role hidden is a delightfully well balanced thing - taking a gun and aiming it at somebody both simultaneously forces you to reveal one of your three identity cards but also gives you opportunities to bluff, or double bluff, or triple bluff, or…

This would all seem a little stale and straightforward though, if it weren't for the equipment cards. Each player gets an equipment card at the start of the game and can take more during their turns. These powerful abilities can swing a certain loss back to an even match, if used correctly. One card, for example, allows you to change the alignment of another player, which is amazing if you've managed to deduce that they are an enemy, and particularly if they've just armed themselves and are in the position to strike a killing blow. Other cards might let you steal an opponents gun or grant you a second turn.

Good Cop, Bad Cop really wins because of how quick and accessible it is. It can be taught to a new player in a matter of minutes and then they can jump straight into the game. A round might only last 5 minutes, but perhaps because of the teamwork required, these rounds feel far less flippant than a every-man-for-himself game like Coup.

Good Cop, Bad Cop does lend itself to a few strange strategies though. One player I had the misfortune of playing with always played the same way: turn one, grab a gun; turn two, shoot somebody at random. He rationalised that in a four player game, there was a 66% chance of hitting an opponent and he was happy with those odds. Hmm. It ruins the game, but kinda makes sense.

Good Cop, Bad Cop fills the same niche as Coup, but I feel that Good Cop, Bad Cop does a much better job. It makes me feel much more invested in the round and is easier to get a new player into. The king of hidden identity games, in my opinion, is still The Resistance, but Good Cop, Bad Cop is going to be something I come back to when I want something shorter and simpler.

So I suggest that you head to the precinct, load up, and ask yourself, "Do you feel lucky, punk?"

Nothing to report. Colour is not used in any meaningful way. Good job!
Email ThisBlogThis!Share to TwitterShare to FacebookShare to Pinterest
Labels: Cards Only, Colourblind Approval, Hidden Role, Secret Objective
Newer Post Home
RobinDavid: Where I talk about boardgames and boardgame design.