I came across Sumeria at a used boardgame auction. Searching through the lots, it presented itself as the ugliest game in the room -- some boring desert themed Euro-game. When its number came up, nobody bid. I took pity. I took stock of my wallet and I took a chance.

So when I pulled Sumeria out with a boardgaming group a few weeks later, it was no surprise that the games repetitive art work and dull desert theme produced some grimaces. Within a few minutes, we had the simple rules down. A few minutes later we were yelling at one another because this game is incredibe fun!

Sumeria asks you to take the role of, well, I guess some kind of trading organisation in ancient Sumeria. It's a little unclear on that point. Over the course of the game, you move your traders around the desert between the various city states, your movements causing the states to gain and lose power in the region. Time your actions right and you'll win resources which add up to victory points. Offer your opponent a chance and you'll be left with nothing!

The rules to Sumeria are fairly straightforward. After seeding the board with a load of traders (small wooden pieces), up the four players take it in turns to either add another trader, remove a trader from the board, or move a trader between settlements. After three turns, we take stock of who controls which region, defined by who has the most traders there, or in case of a draw, who is in control of that region's capital. Tokens are awarded and we do this six more times. All accounted for, the game is finished within thirty minutes.

Along the bottom of the board, you have tiles for the eight city states, all of which correspond to regions of the board. The tiles on the far left are the city states which are currently "in ascendancy". These are the three, which if you control at the end of a round, you score tokens for.

It sounds a little simplistic, but the fun of this game comes from manipulating which states are ascendant in a particular round. Remove your trader from a region and the city state token swaps with the token to its right, potentially dropping out of the top three and putting another in its place. Add a trader or move a trader into a region and the corresponding city state token gains power and swaps with the token to its left. This simple mechanic makes each player quite powerful, despite their limited number of turns. Furthermore, the ascendant states change between each round but your traders stay in place, which means you need a fair amount of forward planning.

When a region is scored, tokens go to both first and second place players, but the first-place player gets to pick which of the token types they would like (gathering more of the same kind results in victory point bonuses). This can add a delicious element of teamwork, diplomacy and back-stabbing!

I've found that Sumeria works best with four players -- which is the maximum playable number. With this number, gaining control of regions is genuine challenge, requiring diplomacy ("help me boost up Shurrapak and I'll let you have first pick of resources") and a hefty chunk of forward planning. Enough brain-work is required that some turns end up being genuine headaches and cries of victory or damnation start being yelled across the table. The first time I played this, the two winning players became very enthusiastic, yelling, plotting, tricking one another. The other players were far quieter, suggesting that playing catch up in this game is very difficult, considering how few moves you get.

I liked that it was easy to get a sense of who was in the lead at any point -- they have lots of tiles of a similar kind -- but actual scoring at the end is not as simple as it could be, forcing us all to resort to a table in the rule book. Like most Euro-games, in game text is kept to a minimum, which means that you can focus on strategy and interaction.

Because there are so few moves and each player move is quite powerful, there is a huge disadvantage to playing first in a round. This was immediately obvious and worrying. The starting player does change in each round, but with six rounds and four players, two players have to face that disadvantage twice. Perhaps this is a good argument for the three player variation, where each player would lead twice and gets additional traders to help fill the board up.

I have to go back to the issue of the art work. It really does suck. If you check out the images, you can see how the cities are simply copied for each state and surrounded by bland desert. Even the sand-dunes are copied across the board, making the whole thing fairly dull. The theme itself is completely irrelevant, so I can't imagine it would have been hard to replace desert with something a little bit more engaging and unique.

The tokens are all good quality though -- very thick card -- and the traders are just your generic wooden pieces, but they do the job fine. 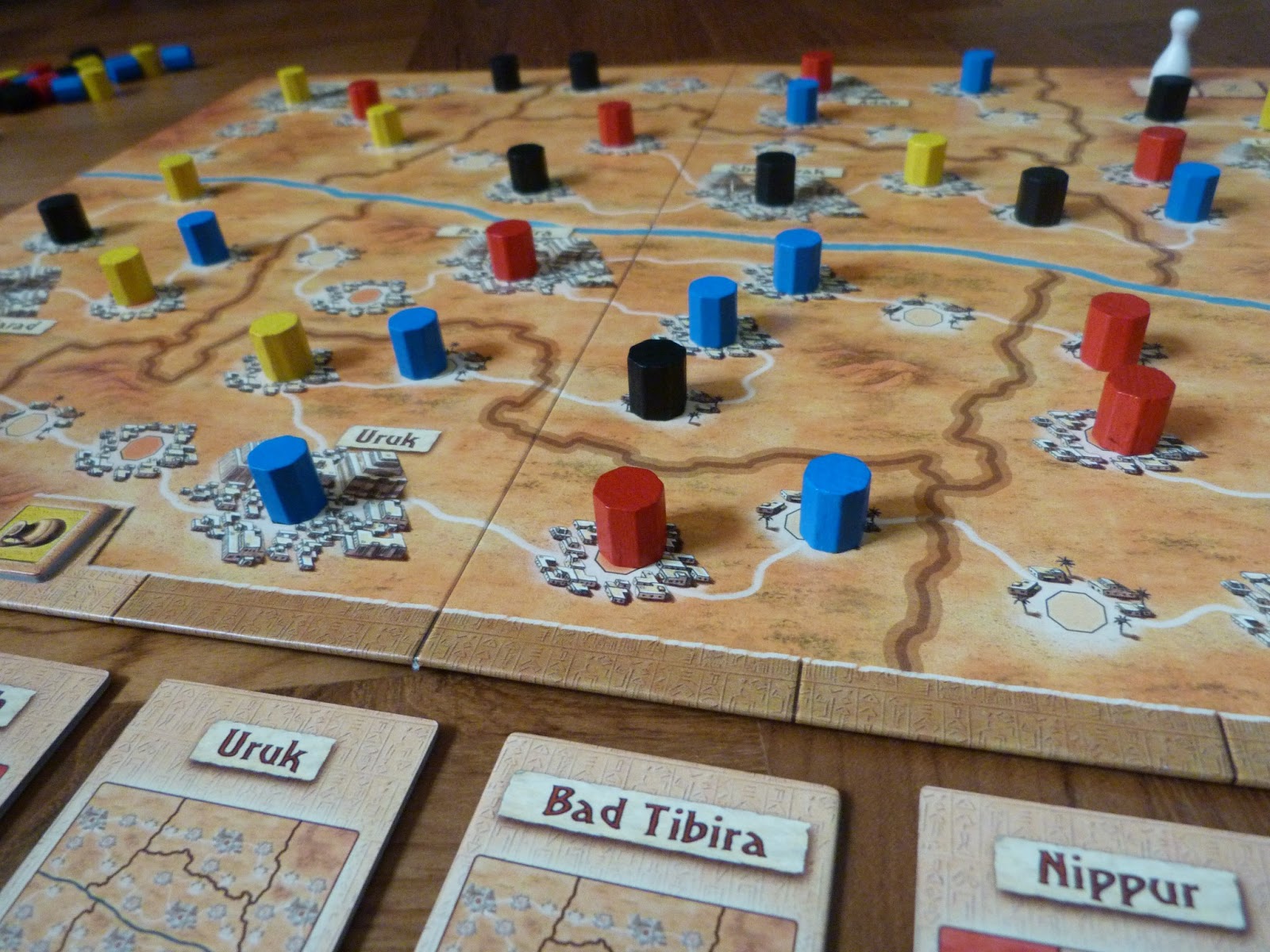 Like I said, I got Sumeria on the cheap, and it really was a steal -- $12 (Singapore). I imagine it will come out to the table a bunch more times in the future, particularly at the end of game nights when we have thirty more minutes to kill. This is not quite filler material, but nothing too deep either. For me, it's a keeper.

The game relies on colour only to differentiate between the traders and these colours have been chosen with some sensitivity: blue, black, red and yellow. The colours are distinct and bright though I may feel the need to pattern the red traders one day. It's nowhere near as bad as Carcassone's meeples.