This game is pretty much like lego in space while rolling dice. You'll make a ship out of little components, you'll get blasted by pirates and hit by meteorites and watch your hard work crumble before your eyes. Maybe you'll make a couple of dollars profit. And then you get to do the lego thing again.

Read that again if you need to: Galaxy Trucker is great fun. You need more details? Ok… 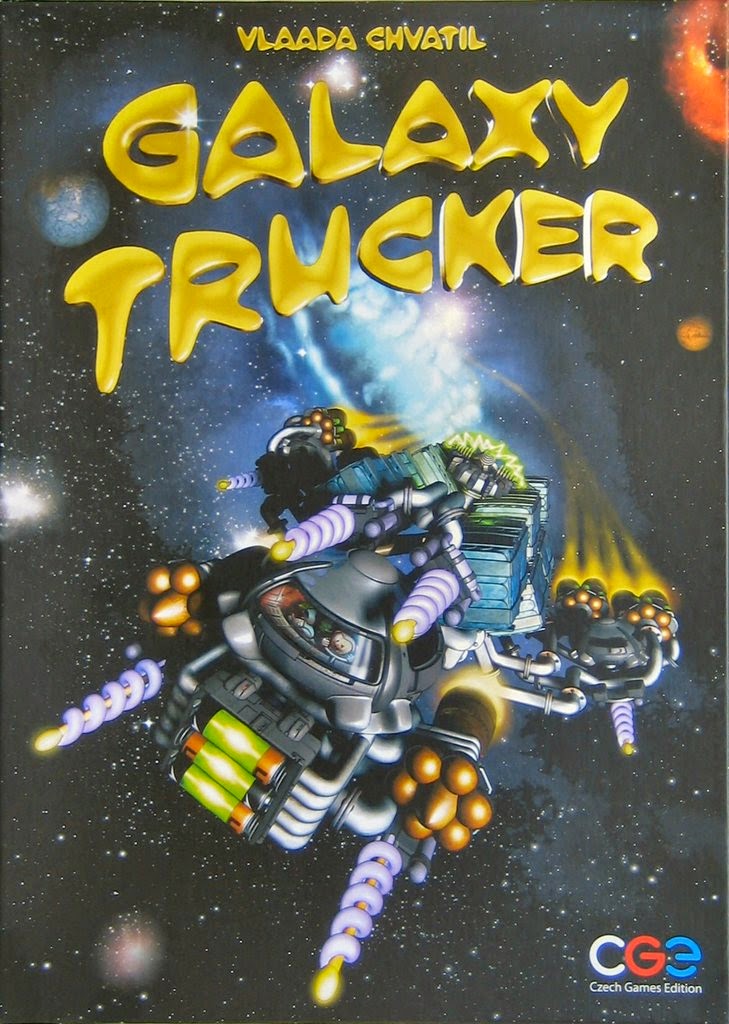 So yeah, you and four friends will be adventuring across the galaxy, attempting to gather supplies from alien planets, fighting off pirates, looters and meteor swarms, and eventually selling the goods that you managed to gather. Each round begins with the construction phase, where you are given a huge pile of ship components, which you must assemble before you as something vaguely resembling a space- worthy ship. You'll need quarters for your crew, storage areas for the all-important goods, massive batteries, and of course, tons of guns and engines. There are a bunch of rules around placement and usage, but they're easy enough to understand, and an there's ever-present timer to make you get a move on, as well as the reward of first-player token for whoever finishes first.

Then the flight happens. Your ships are placed in order based on how quickly they were built and then a series of encounter cards are turned over. These encounters might be the aforementioned pirates, looters or slavers (which you'll keep at bay with your guns), a meteor storm (which will damage you if you didn't do a very good job of building your ship), open space (which requires powerful engines to get through), and old abandoned ships or planets (where you can gather your all-important goods). The player in the lead gets first pick of valuable goods on the planets, but also has to fend off the bad-guys too.

After you dock, you sell your goods, wipe the sweat from your brow, and get ready for another round with a bigger ship.

It's really quite simple, but darn it, it's also a hell of good time. Mostly.


If you're gaming with a group who likes to chill out for the most part, and doesn't take themselves too seriously, then this game is perfect. It'll silly. You'll lose a lot of the time as your ship gets blasted to bits. It's frantic at times, and almost meditative at times. It really is a very unique boardgaming experience.

It isn't for everyone though. You are often held at the mercy of a dice roll (which determines where your ship is hit by meteors or the pirates' cannons) and the super-competitive kind of gamer is going to find themselves getting a little frustrated, perhaps. This is one of the few games I have played where I've witnessed cheating (and called somebody out for it), purely because they couldn't get into the light-hearted spirit of things.

So the winner will be determined by those who can build the best ship, but was also very lucky. And that's fine and fun for the most part. This is an excellent game to relax with, and is particularly well suited for families -- I could see this as being a great educational tool for younger players. I highly recommend it.

If you wish to try before you buy, there is also a well made, if not as exciting, digital version for Android, iOS, and Kindle.

Colour is an issue with the player order markers -- little spaceships that say where you are in space. The colours used on the spaceships are waaaay too similar. As long as somebody keeps track of player order and you choose a distinct colour for yourself, it should be ok.