Who hasn't dreamed of being an explorer of ancient tombs and dangerous ruins? Raised on Indiana Jones and Tomb Raider, the being an explorer was an old childhood fantasy of mine. So will Incan Gold match the excitement of those fantasies? Will it get the adrenaline pumping in the face of terrible ancient dangers and the promise of priceless treasures? Let's take a look! 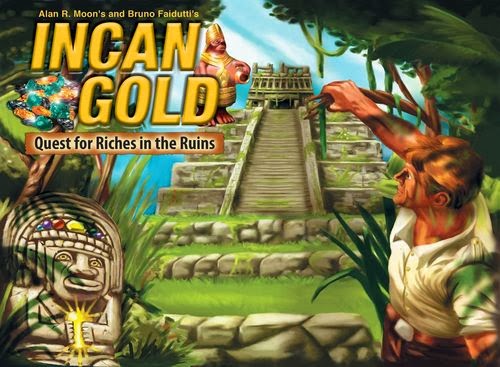 Incan Gold is a pretty straightforward push-your-luck game, where you must risk delving deeper into the mysterious temples of the Incan civilisation. Each turn, players flip over a card (shared amongst all players), which depicts an encounter in the ancient tomb - it could be a totally benign encounter, such as finding gems - or a horrific experience with some ancient zombie or giant spider. Upon the first encounter with a temple horror, players are able to continue, but if said horror is encountered a second time, all players still in the tomb are killed and lose their collected treasures. After each card, players must individually decide to retreat from the temple, with their meager winnings, thus far, or delve deeper, in search of greater rewards. The game takes place over several rounds and the winner is the player with the most treasure after those rounds are over.


How it Plays Out

As you can see, the rules to Incan Gold are really straightforward -- the only decision you have to make is press on into the tomb or retreat with your winnings -- and subsequently, so the game sessions are also pretty simple. Infrequent gamers can quickly get on board and begin amassing their loot. In my gaming circles, most players really enjoyed the tomb-delving theme and the high spirits that accompany the push-your-luck style.

Normally, I'm not enamored by push-your-luck games. By their nature, I find them too random and not very conducive to group play. And even though Incan Gold is utterly random, I actually found that groups playing it get really involved. For starters, unlike the many Zombie Dice clones and derivative push-your-luck games, in Incan Gold, all players play simultaneously - the only decision they make is to delve deeper or run away. But the cards, dangers and rewards are shared by everyone. Treasures are divided between whatever players remain in the tomb, so there are whole levels of mind-games as you try to convince your fellow tomb-raiders to back out. And if you do back out, there is so much glee in watching fellow explorers get eaten by mummies and come back with nothing, while you count your small rewards.

No issues to speak of, other than the treasure being colour-coded. It wasn't a problem for me.

A nice quick game, particularly appropriate for boardgame newbies and families. It's not the best push-your-luck game out there, but it's certainly one of the better light variants on the push-your-luck style. It would be ideal for family gaming and as an opener to an evening or more involved games. It particularly suits larger groups of players (around 5 or so), but with lower numbers, the magic is no longer there.