In this article I'm going to look at some of the actual words and phrases we use in our instruction manuals and how this language conveys or obscures information. As I said in my previous article, the quality of communication in a rule-book can make or break a first play. If instructions aren't clear, they can ruin a first play, leaving players bemused and grasping for structure. Well written instructions, on the other hand, can make a first play an awesome and fresh experience of discovery. 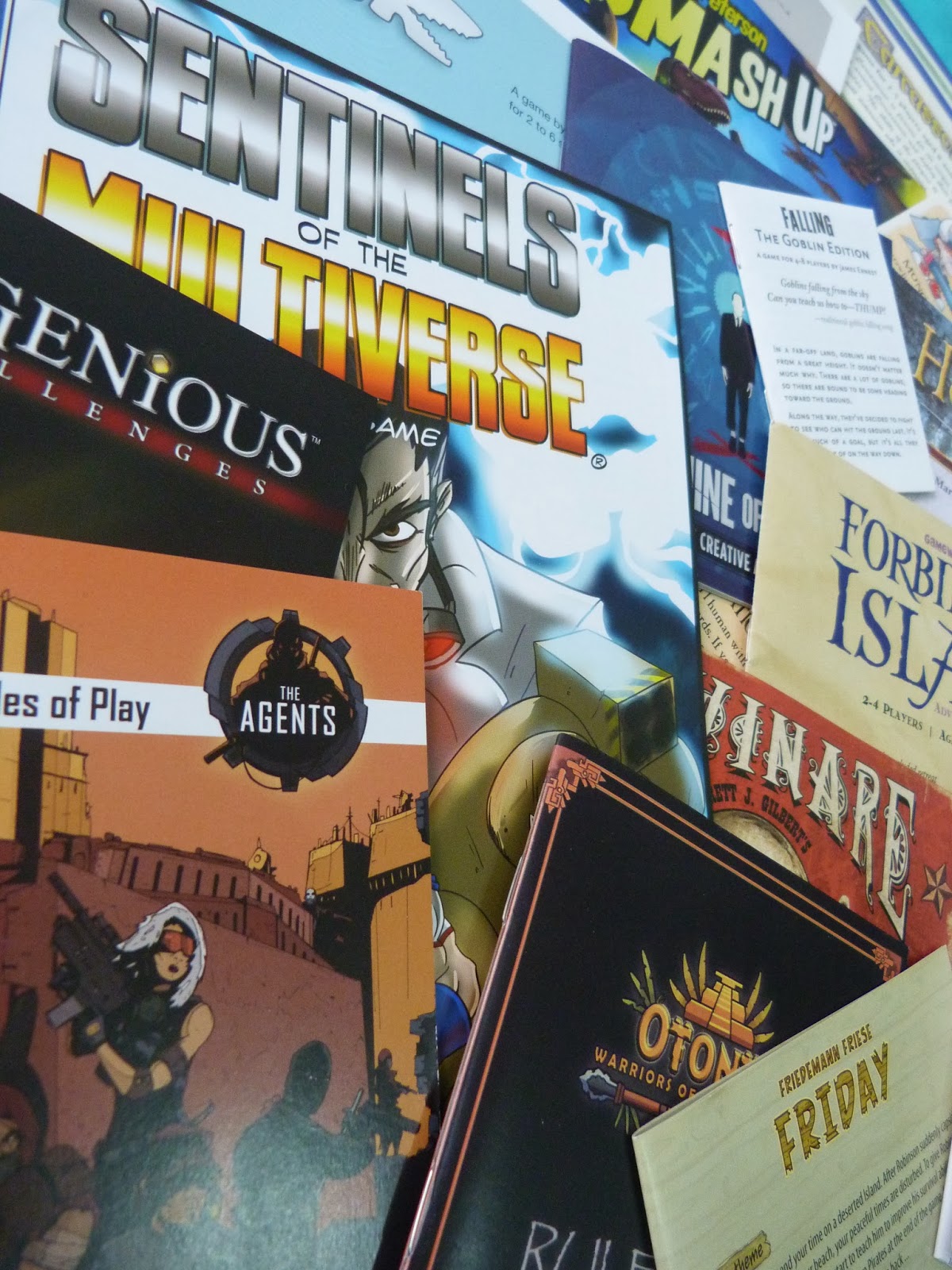 Following are some of the most common issues that present themselves in rule-books and how to make sure you don't fall into these pits when writing your own instructions.


Did you miss Part 1 of this series? In Part 1, I address the content of your instruction manual. Check it out here.

Consistent use of Lingo

Lingo means words associated with a specific (usually technical) topic and boardgaming is full of it. Whilst some lingo can safely be considered as assumed knowledge ("hand", "deck", "board", "token") anything too specific should be explained. Words and phrases like, "mulligan", "draft cards", and "place worker", may as well be an alien language to inexperienced boardgamers. Use lingo with care.

You may also use lingo which is specific to your game alone. This is usually fine if it enhances the theme (Netrunner, for instance, renames the draw pile, hand and discard pile, purely for thematic reasons), but if you do so, make the reference very clear when you first introduce the lingo and then stick to your guns. Don't call something a "scientist" in one paragraph and then simply a "worker token" in the next. Doing so leaves too much room for confusion.

While this is not a particularly common problem, getting prepositions wrong can really wreak havoc on your game. A preposition is a word that indicates the position of something. So any game that requires cards, for example, to be placed in specific positions must make its language clear.

And positions of cards sometimes change depending on where players are sitting. In Netrunner, two players sit opposite each other. One particularly tricky card indicates making changes in the space before that card. Another indicates changing the space after it. Of course, both players have different views on what "before" and "after" mean when they are looking at the row of cards from different directions. If prepositions become too difficult, it would be an excellent opportunity to use a diagram to help explain.

In relation to prepositional errors is a small comment on style. Avoid saying something like, "the token on the right-hand side" - your hand probably has nothing to do with it. Instead, say "the token on the right." I once heard Arnold Schwarzenegger refer to his "right-hand leg". It's not so much a point of confusion - more just an example of bad style.

A pronoun is a word you use in place of a noun. With people, you may replace their name with "he", "she", "you", etc. With a boardgame, you may find yourself referring to a boardgame component as "it" or many components as "them" or "they". For example:

"Rotate the card 90 degrees. It is now out of play"; or
"Place the tokens in a pile, where they can be reached for with ease."

Doing this is often fine, but on occasion, it can lead to ambiguity. Take this example:

"Place a token next to the card. It may now be moved to the discard pile."

In this case, there are two possible nouns (token and card) which the pronoun (it) could be referring to. It's not clear whether the card or the token goes to the discard pile, so we should rephrase, substituting the correct noun in place of the pronoun:

"Place a token next to the card. The card may now be moved to the discard pile."

An easy fix and a remarkably common issue. Whenever you see a pronoun, double check how many nouns it could possibly refer to and clarify if needs be. This is particularly important when an action affects multiple players in different ways - you need to be very clear in each instance, which player you are referring to.

"Is" and "Are" are both verbs. "Is" is singular and "are" is plural. So if you have a singular noun, use the singular verb (The card is discarded) and if you have a plural noun, use the plural verb (The cards are discarded). It may sound dumb, but I've seen this error many times. It often means that players can't be 100% sure if the error is in the noun or the verb, they might assume you meant "cards" instead of "card", discard their hand and royally screw up the game.

Whilst were talking about plurals, lets look at the word "dice". Technically, the singular form is "die" and the plural form is "dice". However, I suggest you steer clear of "die" - its archaic and unwieldy. Instead, always use "dice" and clarify the number with adjectives and determiners:

A dice
The dice
One dice
A pair of dice
Two dice
Etc...

As for "dices" - that's something you do with vegetables. Just, no.

Icons must be clear

Yes, use of icons is considered language. Icons can be a great tool in games. They may allow the game to be played by non-English speakers and let all players quickly see the purpose of a card. If you use icons in place of words, the instruction that the icon is trying to express must be easy to grasp and be unambiguous.

Any other language peeves, potholes, and problems? Let me know! If you are a designer or a publisher and are concerned about the quality of your rule-book, contact me through my about page and see if I can help.
Email ThisBlogThis!Share to TwitterShare to FacebookShare to Pinterest
Labels: Design
Newer Post Older Post Home
RobinDavid: Where I talk about boardgames and boardgame design.