Smashing things up is great. When you're angry and frustrated, there's nothing quite as satisfying as smashing something. And here's a game to scratch that smashing-shit-up itch, without you actually having to throw your TV out a window or punch your brother. Rampage is a glorious, cathartic, smashing-shit-up-a-thon, with the added bonus of meeples and rules and stuff!

Note: Rampage is now called Terror in Meeple City, but this review was written before this change

Players in Rampage take the role of kaiju - gigantic monsters hell bent on the destruction of our little Rampage City. Through flicking, blowing and dropping their wooden kaiju on the board, players hope to both smash up buildings (and, for points, eat the meeples contained within each one) and beat the living daylights out of each other.

Set-up is quite a long process, where we have to construct buildings by stacking cardboard floors with multi-coloured meeples between them. We then place our kaiju token (which we use to indicate our position and flick around the board) and our kaiju character (who we drop on the buildings or use to help with some other abilities) in the corners of the board. Then we're good to go!

Players take it in turns carrying out two of four, dexterity-based tasks. These are:


After each players turn they look around the district their kaiju is currently in and devour meeples who are unfortunate enough to be outside of a structure. As you can see, the turn structure is, in essence, very simple stuff. 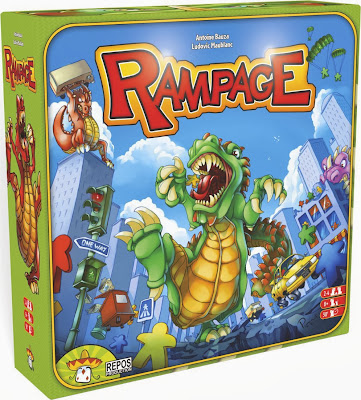 Under the hood, there are some more complexities, but nothing too taxing. The aim of the game is to score the most points, which are accumulated through eating sets of the six different coloured meeple types, collecting building parts, knocking out (and thus collecting) your opponents teeth, and by fulfilling the requirements of your specific character.

Of course, each kaiju has its own specific tricks up its sleeve. At the start of the game, players receive a unique character ability card and an objective card (both of which are public knowledge) and a secret, one-time character power. During my first game, I had the ballerina skill, which meant I had extra opportunities to flick my token each turn and move around the board - it was awesome, because I was able to run around, snatching up extra meeples. Another player was the bruiser, who got extra points for attacking other kaiju. It wasn't as cool, as it meant we kept avoiding him. It was also deemed from my player card that I'd get bonus points for collecting the yellow (female) meeples. Another player had to guess which player at the end had the most meeples (meeples acquired by each player are kept secret from other players until the end of the game). My one-off power involved evicting meeples from buildings - a pretty great card when there's a bunch of meeples holed up in some ruins. Overall, these abilities - which I could see as being totally optional - add a lot to what would otherwise be a fairly straightforward dexterity game.
The game also has a great system in place to try and make sure your destruction is purposeful. First of all, the board is subdivided into districts. At the end of your turn, you can only eat the meeples in the district you currently reside in, so you're only helping your opponent if you send meeples scattering all over the board. Secondly, meeples that leave the board go on a shared penalty tracker. When thresholds on this tracker are reached, offending players lose teeth (meaning they can eat fewer meeples per turn) or grant their opponents extra moves for a round. It's pretty harsh and does a great job of keeping the game strategic, to an extent.

I found that every player at the table was having a great time with Rampage, but that's not to say its without its flaws. For starters, the rulebook and card instructions are frustratingly vague and unclear. This may be because I was playing an early edition, or maybe because the game is trying to remain accessible to a large variety of gamers, but the rules-baron in my play group was having a hard time coping with the ambiguities. In the end, for several oddly phrased abilities and awkward placements of meeples, we just had to have a group consensus and go with the flow, hoping we got it right.

Components wise, I was pleased with Rampage. The board is thick enough, the cards of reasonable quality and the character tokens and meeples all made from wood. Pretty much the level of quality I would expect.

Colour does factor in to Rampage. Each kaiju is denoted by colour only, but there are only four to keep track of. The meeples are also denoted by colour and it's important to recognise these colours as you only get points when you have a complete set of the six colours. Each coloured meeple has a printed design to differentiate it from others, but I didn't think these were clear enough. If you hold the red and green meeples up together, you will notice the different costumes they are wearing, but I found it hard to use this method of identification on the busy game-board. In fact, I did mix these coloured meeples up and lost out on points when we were scoring at the end - I thought I had two sets, when actually, I had three green meeples and only one red meeple, knocking me down to one set - I was pissed!

Rampage is a rollicking good time of destruction and sabotage. I really enjoyed the theme and found the simple gameplay is tremendously enjoyable - there was a lot of laughter and backstabbing around the table as we demolished buildings and knocked our rival kaijus over. Rampage would make an awesome game for families with young kids, but is equally heaps of fun for adults to play. It's not deep at all, and a bit too long to be a filler game, but it will still find its place in my game collection.